The problems with the obamacare website could have been predicted by anyone looking into CGI Federal, the company behind the debacle. The parent company of CGI Federal was fired by the Canadian government for failing to meet its contractual agreements.

Given the historical failures of the developers, you'd think the web site would have been tested before launch. Ah, but it was. Just days before the October 1st launch, the site failed under the load of a few hundred users. Despite numerous warning signs of eminent failure, the public launch went forward, with the expected results. The companies incompetence was more evident after reports that the healthcare.gov website contains copyrighted software code, used in violation of the licensing agreement.

The public's experience with the obamacare web site is so bad, the administration won't answer questions about successful sign ups. They did however trot out a successful enrollee for the press to fawn over; until it turned out that Chad Henderson didn't really sign up, he was just a shill from the Obama election campaign. Most recenty, HHS Secretary Sebelius tried to claim the White House didn't know about issues with the site "until days into" the launch, despite widespread reporting and complaints.

Are these really the people you want making decisions regarding your healthcare? 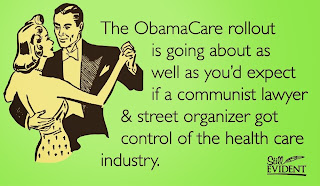 It hardly seems responsible for this administration to award such a critical project with no public notice and no competitive bidding. Some explanation of the sweetheart deal for CGI Federal might be in the early access to the White House and president Obama granted to company executives. But there might be another explanation for the Obama administration's fondness for the Canadian company. It turns out the same company was also behind the failed Canadian gun registry program. Is the administration hoping to leverage that project as well?