There was "frost on the pumpkin" when I stepped out of my car at the North Mountain parking area for their October USPSA match last Sunday. Shiver! It was my first frost sighting of the season, and I'm really not ready for Winter, but fortunately the sun warmed things up quickly. As I glanced over at the range I could see that match directors Dan and Elaine were in a Halloween mood. Spider webs, goblins and pumpkins were the order of the day.

The first stage I shot was a "memory stage," consisting of 10 USPSA targets. After a bit of study, the challenge proved to be fairly straight forward, as long as you had your plan well in hand. For a Production shooter the stage was balanced with 5 targets engaged from two shooting positions, just don't forget any targets.

The next stage was not so Production friendly. With a minimum of 22 rounds needed, the options were to shoot from three positions, or engage all the targets from just two positions and do (at least) one standing reload. It was a interesting choice, on a fun stage. The steel plate "pumpkins" where perched above no-shoot "goblins." 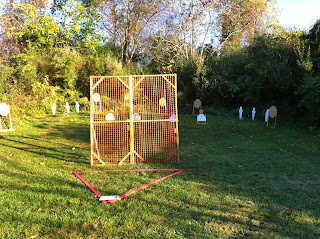 Next up was an interestingly themed stage that had two shooting boxes. From the first box, the "pumpkin" plate rack was engaged. Moving forward to a second shooting box there were four paper targets guarded by two frowning ghosts. The fun, or evil part, depending on your point of view, is the targets were marked with black "spider webs." And those black areas were hard cover, meaning a hit in the black counted as a miss. 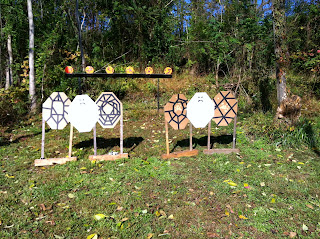 The next stage had three "tunnels" through which we engaged the target arrays. The portals were placed such that we had to merely stoop for two of them, and the large middle obstacle required a deep squat or kneel to engage the targets. The first group had two paper and a steel popper shot through the open-ended barrel laid on it's side. After completing the end array, you moved to the middle tunnel which was a large black drain pipe set on the ground. Two pepper poppers were engaged which released two swinging paper targets. Shooting the steel and swingers from a knee was only part of the challenge — I had to then get back up in order move to the next position! 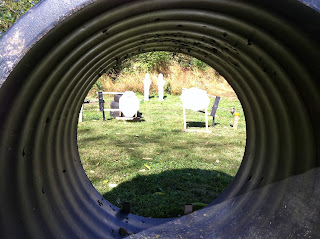 The final stage was the classifier, CM 98-03, "Six." This stage provided a fast finish to the match. Two on paper, a pepper popper and smaller US popper, followed by two more shots on paper. Three or four seconds and it's all over, for better or worse.

The November North Mountain match provided courses of fire that were fun to shoot and fun to look at. Kudos to the match directors for their time and imagination in setting up a seasonally themed shooting event.