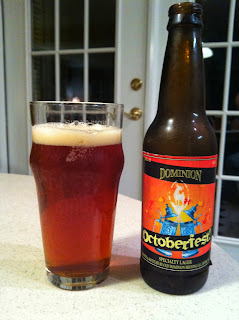 While doing out grocery shopping this weekend, I checked the beer aisle for any Oktoberfest beers still in stock. After enjoying the Oktoberfest beer at Blue & Gray's celebration last weekend, I was in the mood for some more Märzen style beers. Lo and behold, not a single Oktoberfest to be found, except the ubiquitous Sam Adams seasonal. Well it is almost October after all, the season's all but over! However, upon arriving home, I remembered that I had a bottle of Dominion Octoberfest in the fridge. It was part of a sample box sent from Old Dominion Brewing last month. I opened that bottle after dinner Sunday evening.

The beer pours a reddish-orange color. I had to pour hard to build up the off-white head, which dropped quickly to a persistent, but thin ring. The aroma is very malty, with toasted, sweet bread hints. The flavor turns on the malt aspect full bore. It's bready, slightly sweet, with an ever so slight hop bitterness. There's a bit of sharpness in the finish, but overall the flavor is malt, pure and simple. It's bready, but not overly sweet. The mouthfeel is creamy, with low carbonation.

I guess I've been lax in picking up stash of Oktoberfest/Märzen beers this season. So many beers, so little time. I'm glad I had this bottle to open to satiate my craving a little bit. Officially, Oktoberfest runs through this coming Friday, but my marking of the "season" may be shortened.

The beer reviewed here was a promotional sample from the brewery. My impressions are provided of my own free will and mind.