It's been a few months since I got over to the monthly Walnut Creek Practical Shooters USPSA match at Summit Point, West Virginia. Last time I made the early morning drive it wasn't dark (or cold) for the start of the drive. The cold and dark early morning made me briefly wonder why I do this, but I was still looking forward to the match and the friends. My dashboard thermometer read 27° when I arrived at the range, but we saw a "warmer" 32° by the time we fired the first shot. Fortunately it warmed further to a tolerable temperature as the morning progressed.

The first stage I shot was called "Goblin's Run." The shooter started seated, with the loaded gun on a table. It was a pretty straightforward stage from there, the final shots made on a swinging target. A good stage on which to shake off the cold.

Next up, "Don't Go Outside," was very well laid out and required the shooter to make full use of the free fire zone; going in and out of the corners and "jags." For me it took some extra thought to plan out. There were targets that were obviously, at first, engaged from certain positions. But as a Production shooter limited to 10 rounds in the magazines, I saw traps of standing reloads if I took the obvious route. There was also one target that had to be engaged from a extreme lean around the left side of a wall. The Walnut Ridge stage designers frequently place targets in positions that put the shooter off-balance, adding to the challenge. Most often I try to end a stage on those shots, but in this case my plan put the target in the middle of my run. I had a good run on the stage, despite one D hit. 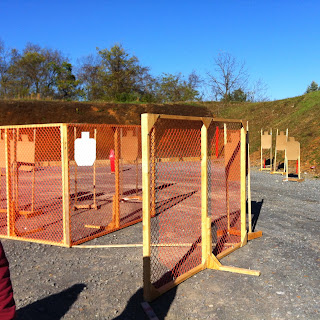 The third stage our squad shot was the Classifier, "Can You Count?" I had never shot this popular standard stage, but was looking forward to it. The directions are to draw the gun, put five shots on a close target, perform a mandatory reload, then put five hits on a second target. It's truly a "go fast or go home" stage. After the first string, the RO stated, "That was a sub 5 second run." I ran the second stage and as soon as I finished I saw a lone hole out in the C zone. "D'oh," I exclaimed to the amusement of my squad mates. But, again the time on the string was good. My total time for the two strings was 9.40 seconds, with 19 A's and 1C, for a hit factor of 10.4255. I think that's good enough to add a B-Classifier to my records. Given my recent string of poor Classifiers I was VERY happy with this one, and it also gave me a 6th place finish on the stage.

"Black Cat Alley" had 28 paper targets and 2 Pepper Poppers arranged in a long line among some angled walls. Most of the paper targets were arranged in pairs, one on top of the other, leaving only a portion of the top target exposed. While there were no hard cover or no-shoot targets, shooting too low would put an extra hit on the lower target and earn a miss on the top. I took my time on this one, but did have my only miss of the match on this stage. 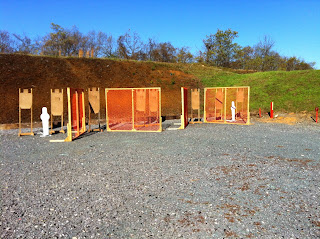 "Freddy's Revenge" was an interesting stage that was essentially a U-shaped run with targets on both sides of the "legs." Depending on how a shooter decided to run it, they could be shooting while moving backwards, or running up range past a target and turning around to shoot. Either way there were targets that could be engaged at point blank range. Targets frequently had pasters blown off, or the target destroyed by muzzle blast. I opted for a conservative approach and crossed the "U" at each end to avoid retreating back up range. Granted, it was fun to shoot the targets point blank while running past them, hitting 20 A's, 2 C's and 1 D. That seemingly good run was actually my second lowest stage finish of the day. 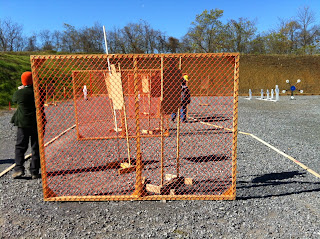 The final stage for me was "Trick Or Speed." From a single shooting box, there were three arrays of targets to be engaged; five falling steel poppers, a Texas Star, and finally three paper targets. A mandatory mag change was called for between each array. I struggled on the last two plates of the star, but at least finished with 6 A hits on the paper.

I was extremely pleased with how I shot on this chilly Saturday in West Virginia. Just one miss and two D hits, gave me a 13th place finish out of 25 Production shooters. I finished three of the 6 stages in the top ten. But most exciting personally, was earning a personal record of 90% of the available match points. It was a fun match and a very satisfying day of shooting. I'm glad I didn't let the cold and dark deter me from playing.