The email from Jeff at Blue & Gray warned that this might be the last weekend for the Baron von Steuben Oktoberfest seasonal. As noted a couple weeks ago, I hoped to get back to the brewery to enjoy it again, so we headed over to Blue & Gray Brewing on Friday to enjoy some good beer. Since it was the 1st Friday, Irish music was expected as well. We took a table outside and started out with a couple of pints of the Oktoberfest. Colleen and I enjoyed the unseasonably warm weather while sipping our beers under the stars. 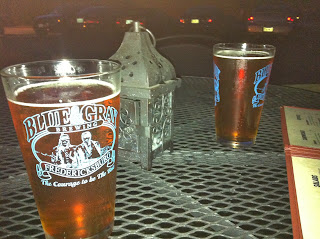 Talking to our waitress, we learned that a batch of Kirkland's Kölsch that was aged in a single malt whiskey barrel from Copper Fox Distillery was tapped and available. She was quite enthusiastic in describing the beer, so when Checkered Flag arrived to join us for dinner we ordered three half-pints to accompany our entrées. As the glasses were set on the table, the server exclaimed, "Oh, that smells so good."

She was correct. The beer had a pleasant malt whiskey aroma. The whiskey was strong in the flavor as well. Though predominant, it was extremely pleasant and drinkable. The taste was there, but the alcohol burn was mitigated by the beer. I could still detect the presence of the Kölsch, but it served mainly to "soften" the whiskey. All three of us enjoyed the barrel aged beer very much. Aging beer in whiskey barrels can be hit or miss; too long and the beer flavor is overcome, tap it too soon and it just gives the beer an off flavor. However, I think Blue & Gray hit this one just right.

The Irish music? Unfortunately, this night we supplied our own thanks to iTunes Radio. We're having a run of bad luck catching the house band. Last month we enjoyed dinner inside, only to learn the band was playing outside, and we caught only a few songs at the end of the evening. On this night, for whatever reason, they didn't show up. Checkered Flag commented it was like searching for Brigadoon. But, in any event, the beer, the food, and the company were all excellent.