On Saturday morning I volunteered to help set up the USPSA match held by the Fredericksburg Practical Shooters. They're trying something new at the club this year. The set up crew can optionally shoot the match Saturday afternoon, which is an enticing offer. There's the downside of having labored all morning before shooting, but it also leaves Sunday open for other activities. Besides preferring to devote Sunday to family matters, I prefer a day to recover from shooting before returning to work on Monday. Although when I saw the weekend weather prediction on Friday I was questioning my decision. There was a predicted 14 degree cooling on Sunday, which I think in actuality ended up closer to a 20 degree differential.

The setup crew got started at 7:00AM loading target stands and poppers onto the trailer. We benefited from the reuse of walls and fault lines left in place from last weekend's Area 8 Championship match. Six stages and a Classifier were in place by about 10:30AM. We took a break to relax and get geared up while the match directors did the final target placement and review. By the time we fired the first shot a little after 11:00AM we were already feeling the effect of the heat.

I did get videos of most of my stages, which are linked in the following descriptions, for those interested. As fair warning I recently discovered that YouTube had chosen "Comedy" as the default category for my shooting videos. (That's just mean.) Stage 1, "Gravity" was a quick course with targets engaged from both ends of a wall. Shots from either end required a significant lean but were not too difficult. I didn't get into the position I wanted at the end, and needed to adjust my footing several times.

The next stage, "The Hollow" was an interesting course with the free-fire zone being a cross-shaped area. One had to be extremely cognizant of muzzle direction with retreating, and unfortunately there were a couple DQ's due to breaking the 180. There was a swinging target whose activation popper I hit early in the run, figuring the swinger would have slowed by the time I engaged the target. In fact, it had completely stopped when I got to the right wing of the course, which was good for a couple of A hits, but caused me momentary confusion wondering "Where's the swinger?" 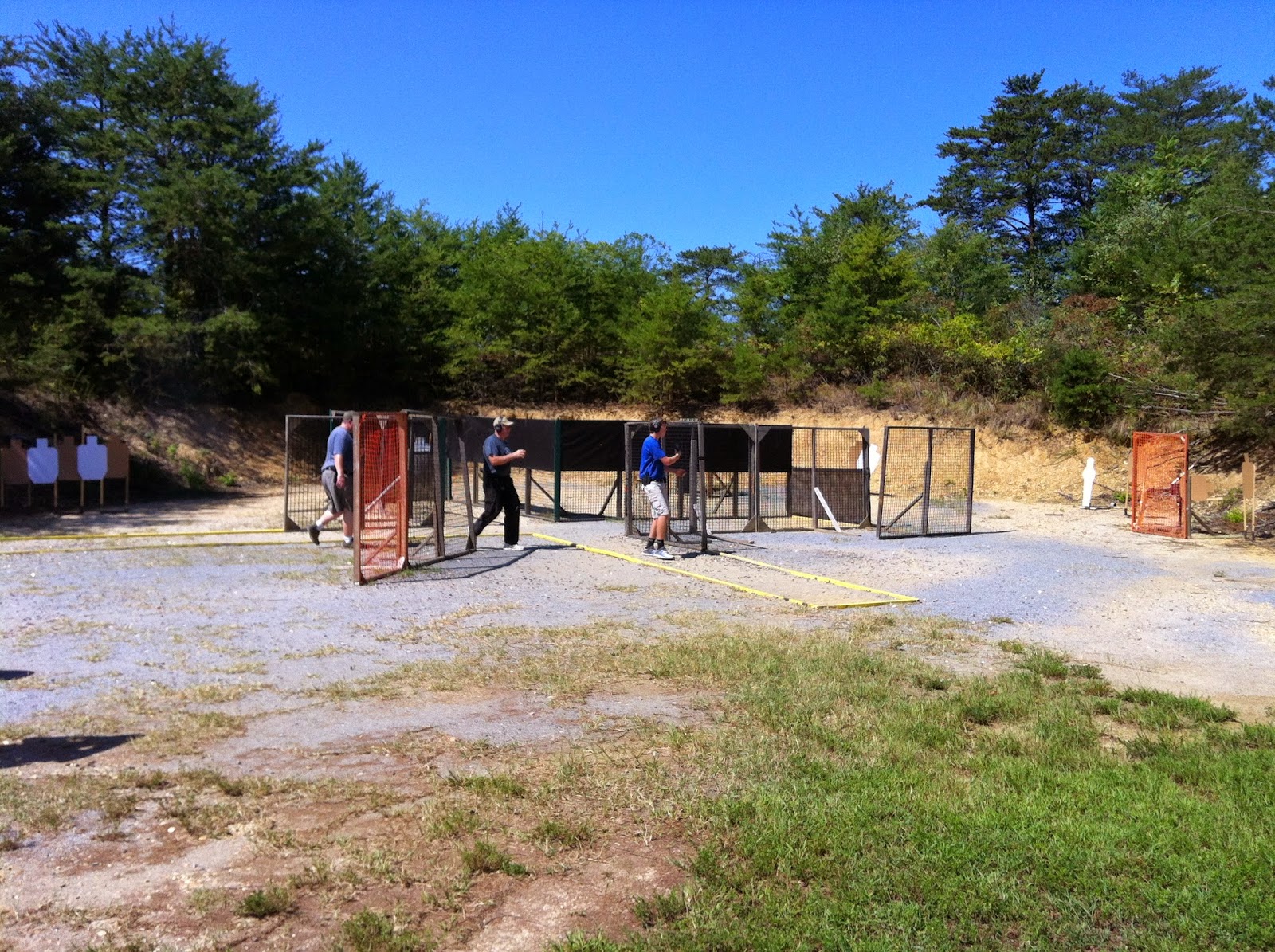 Stage 3, "The Outsider" was a "running" stage, set up in the large bay at the range. There were long sprints between shooting positions, but also a fun "shoot on the move" finish on the last leg. Stage 4 was the Classifier 13-07, "Double Deal." The shooter starts seated, holding a pair of "playing cards," with the loaded gun on the table. Quick and close range shots were required.

Stage 5, "Pet," featured the "tank" mockup from the Area 8 match. The shooter stands inside the three walls, with the empty gun and all reloads coming from a shelf. All the targets are engaged from small side ports or through the small "gun barrels" coming from the front. All the views are extremely restricted. Adding to the challenge, when I leaned forward to see through the shooting ports, my sweat, which was flowing freely by this point, ran directly into my eyes, which burned and made seeing clearly quite difficult and caused a lot of blinking on my part. Still, a fun and out-of-the-ordinary stage. 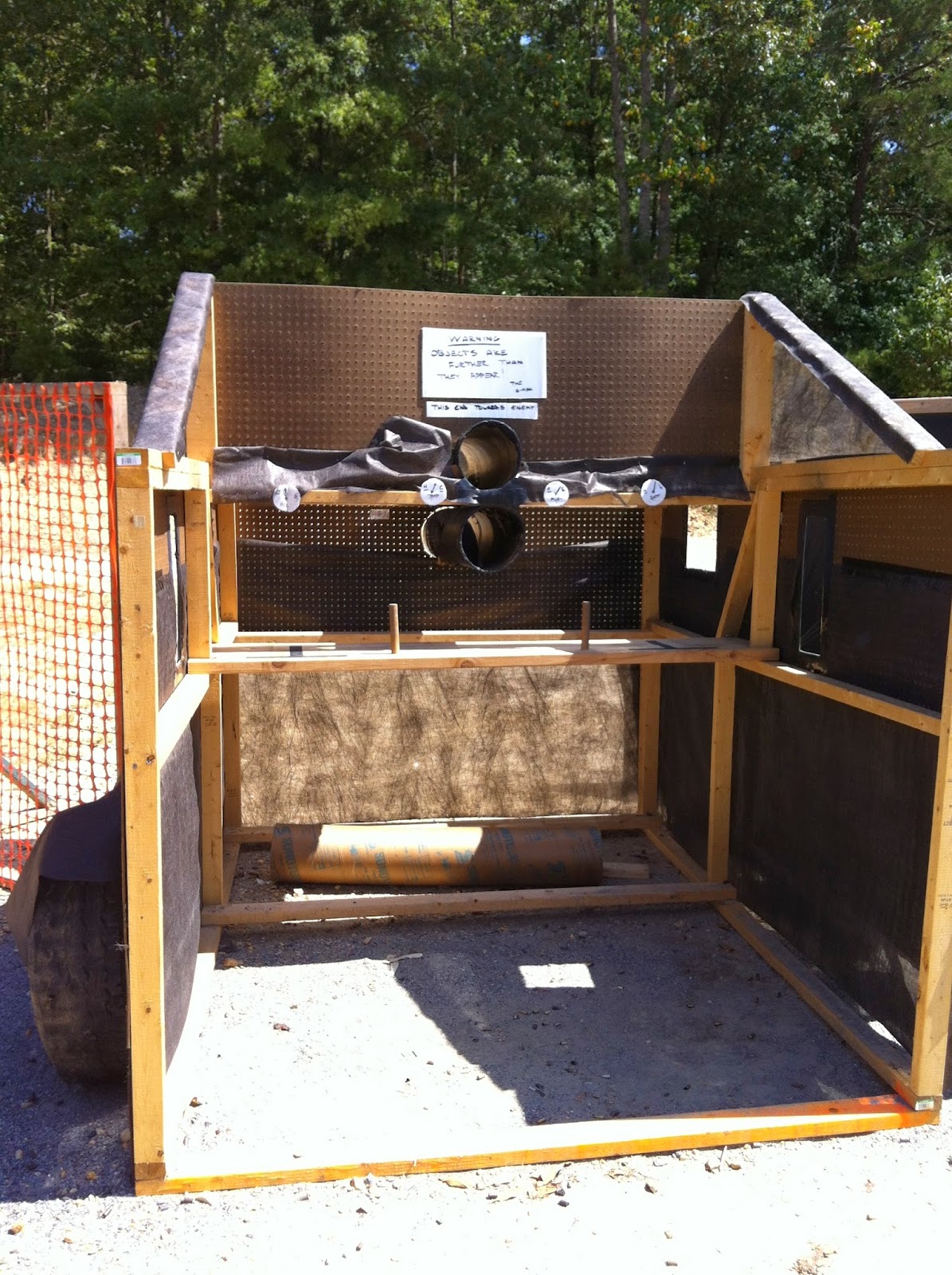 "Walk the Line" was the stage that the setup crew was talking about with some angst all morning. The shooter's weak hand was tethered to a cable that was strung behind the shooting area, forcing the entire stage to be shot strong hand only. The paper and falling popper targets were not all that close either. In order to reload, you had to step backwards out of the shooting area to gain enough slack to use your support hand to do the reload. Since my reloads were not planned but done when I hit slide lock, this added confusion causing a bit of backtracking. Despite the unusual challenge, I was actually looking forward to this stage. I surprised myself on this one, hitting the steel on the first or second shot, and earning just two misses, one of which was on the swinging target.

The final and seventh stage, "Judith", was another table start, with an unloaded gun. The 15 targets were easily grouped into 3 groups of 10 shots, which meant slide lock reloads for Production shooters, though all done on the move. At the end of my run, the timer read 3.8 seconds, which was obviously an error, so I earned a range equipment malfunction reshoot. On the second run, I made a last minute change to my plan, which in theory, would have avoided the slide lock reloads. Unfortunately, an extra shot threw out that new plan, which wasn't well-embedded in my head. I had a noticeably slower start getting up and around the table as well. Looking at the posted scores, I apparently had a no-shoot hit I didn't know about. In any event, I got to shoot that much more, and that's not a bad thing. 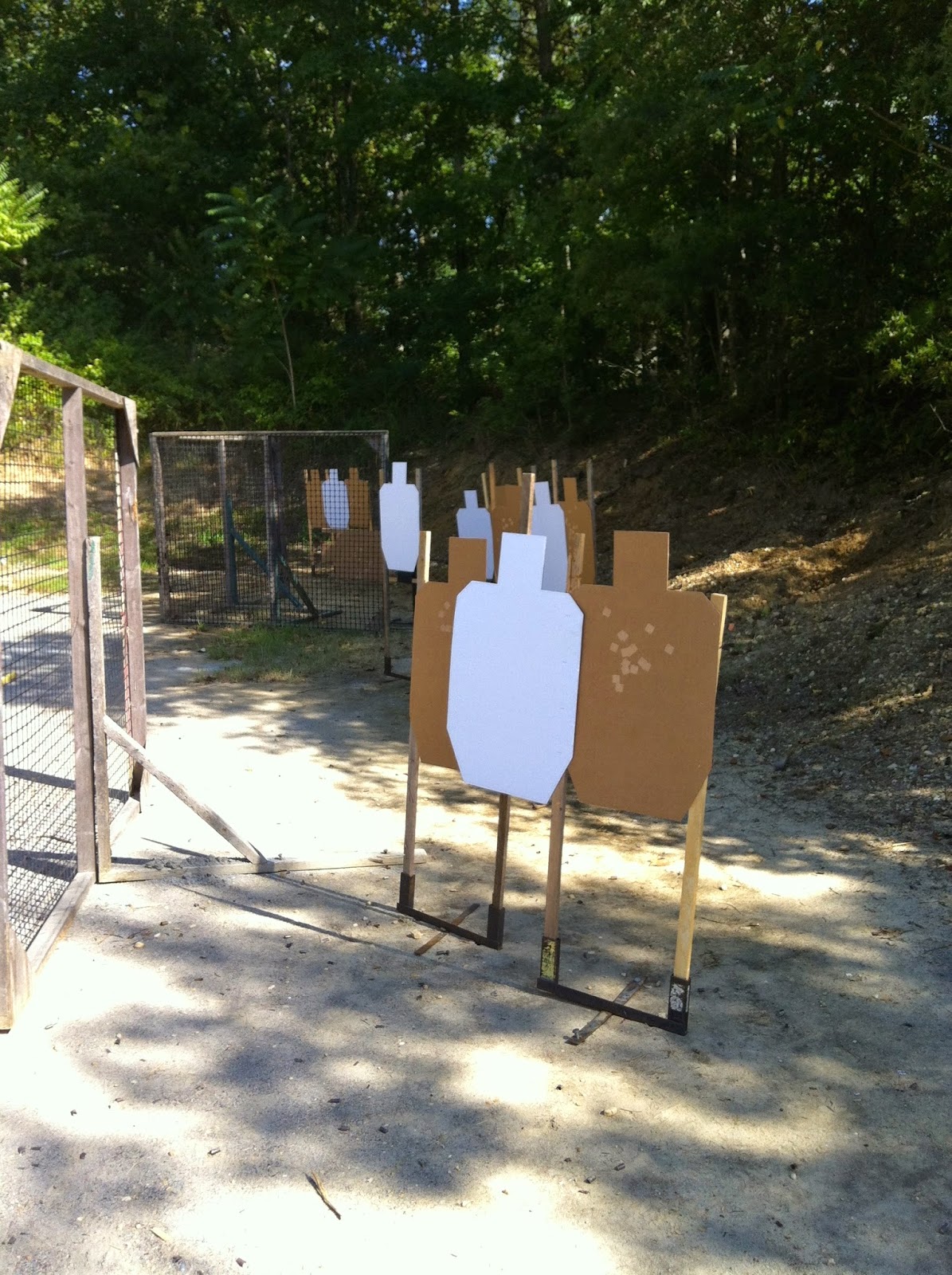 Despite the oppressive heat this was an excellent match. I felt really good about most of the stages. Apparently many other shooters did so too, as my overall finish was lower than I expected. Match Directors Alan and Clay made good use of the Area 8 props left on the ground to create a challenging and fun match. I am sure even those who shot the championship found new challenges and excitement too. My friend Greg successfully shot his first USPSA match and I think he's hooked.

It was indeed a long day. We spent over 9 hours on the range, in the sun, and I was quite exhausted when I got home. After a shower and a beer, I found myself taking a rare, but welcome nap. Though I was a bit envious of those shooting in the substantially cooler weather on Sunday, I was also quite thankful for that day of rest before returning to work on Monday.