Emptied Those Heavy Seas Kegs For You

On Friday evening we headed over to Park Lane Tavern to enjoy some Fish 'n Chips for dinner. Park Lane does a pretty decent version of the classic platter, and there's good beer. I had missed the Heavy Seas Brewing "Steal the Glass Night" earlier in the week, but was pleased to see the brewery's tap handles still up. There were three beers from the Baltimore brewery available; Siren Noire Imperial Chocolate Stout, Double Cannon Imperial IPA, and Winter Storm "Category 5" Ale, which was served on cask. Decisions, decisions. The bartender offered us sample of all three, which we didn't turn down.

The Winter Storm Ale is one of my favorite beers from the brewery. The cask serving was hitting a very nice temperature and carbonation level, so that was my decision. As I watched the server pull the handle to pump the beer, he remarked that the cask was getting empty and this was to be the last serving he'd be able to pour. Whew, just in time. 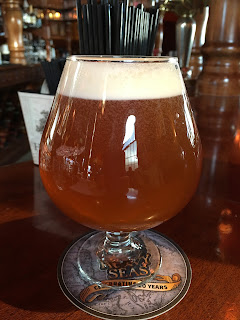 The large snifter got me through dinner with ease. I typically pick up a case of this beer when it comes out each winter but didn't get to that this year. I was glad to have gotten this pint to enjoy.

For her selection, Colleen had the Siren Noire. Once again, as the beer was being poured, the keg started running dry. I think the bartender was a bit flustered, but it had been a few days since the STG event, so it was not unexpected. I actually didn't think they'd still have the beers available at all.

This is a new Heavy Seas beer that we'd not had yet. The aroma and flavor was ripe with dark fruit, bitter chocolate, vanilla and oaky bourbon. At 9.5% ABV it's a rich, enjoyable sipper. 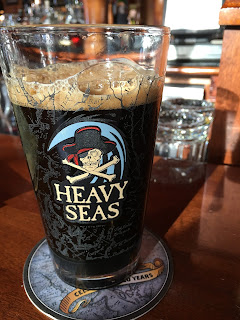 We had an pleasant dinner with a couple of excellent beers. I even snagged a Heavy Seas 20th Anniversary coaster for my collection. We opted to not try for emptying the Double Cannon keg!