It's been a low-key, lazy kind of week around the homestead. (Hence the dearth of musings.) We had plans to visit Capital Ale House for a Bell's Hopslam tapping last night, but instead decided to simply relax at home. Turning on the VA Tech basketball game, I realized I was still in the mood for a big IPA-type of beer. Lucky for me, the downstairs beer fridge accommodated. 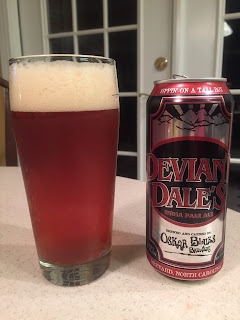 This 16 ounce can of Oskar Blues Deviant Dale's IPA was hidden in the back of the fridge. The pine and citrus hops balanced with the sweet malt backbone make for a strong, flavorful sipper. And sip I did. At half time, I realized I had only consumed about half the beer. By the end of the game, I still had a mouthful in the glass.

I hadn't intended to nurse the beer, the good thing about "big beers" is they taste better at room temperature than straight from the fridge. I was able to savor the flavor throughout the evening and never had to get up and go find another beer. That's a lazy evening!