The last weekend in February saw a wide swing in the temperature from day to day, and was also filled with opportunity to enjoy time on the range. Given that the first weekend in March may bring more snow to the area, these days were most welcome.

On Saturday morning we met up with other Catholic shooting enthusiasts to mark the Feast Day of Saint Gabriel Possenti, the patron Saint of Handgunners. Though the temperature was below freezing, we enjoyed a fun couple of hours at the range shooting and talking about guns, politics and faith. It was a fun start to a busy Saturday. After warming up with a couple mugs of hot coffee, Colleen and I headed out for a visit to Tin Cannon Brewery in Gainesville. (Even the brewery name maintained the weekend's theme.)

Sunday morning I was again up early to head out to the Cavalier IDPA match. This month's match was a Classifier match so I took the opportunity to get classified in the Compact Carry Pistol (CCP) division with my SIG P239. I don't shoot this gun all that often, despite the fact that I do enjoy shooting it, and it shoots well for me.

I was moderately pleased with how I shot with the compact gun, though I barely missed a close range head shot early on. As I approached the target afterwards and saw the hole so close to the perforation I tried willing it up that 1/8" but it just didn't move. But what was most pleasing was the final stage with the 20 yard barricade shots. That's where it typically falls apart for me. This time I managed all 30 hits on paper for last stage. Although many of my hits were in the low -3 area of the targets, it was a good feeling to not have any misses there, especially with the small gun. It may have been the first time I did not have any misses on that stage of the classifier. I will have to work on shooting a bit higher up on the distant targets. I don't have my score for the match yet, but am happy to get a classification for CCP whatever if turns out to be. Given how much fun the P239 is to shoot, I may shoot in more often in matches.

Since I headed out early I beat the crowds, as with previous morning, the shooting fun ended early. Unlike Saturday morning, the temperature Sunday morning was in the upper 50's. Instead of numb fingertips, I actually worked up a bit of sweat under my ball cap.

Again, I did enjoy some hot coffee upon arriving home from the range. My coffee mug all weekend long was appropriately themed. 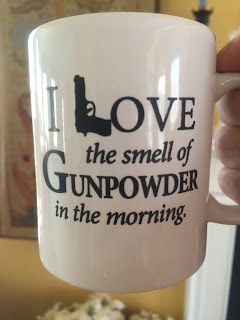 There's was even time found time to work my tax returns this weekend. I don't want men with guns coming to demand their cut of my hard-earned income.