Until last weekend, we hadn't visited Spencer Devon Brewing in a few months. When we got back to the brew pub last weekend, I was pleasantly surprised to see that there were a number of new beers on tap. I was sorely tempted by a couple of the high ABV offerings, the Hush Hush Double IPA and The Chimneys Wee Heavy descriptions were particularly tempting. In the end I opted for the Fall Line Winter Pale Ale. 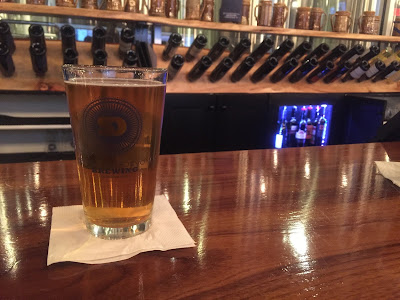 The Fall Line Winter Pale Ale came out bright, clear and with minimal head. The aroma is that of pine and citrus. The flavor is bitter citrus rind with resinous pine and tropical fruit. The beer is nicely balanced and leaves a mild, short-lived bitterness behind. At a very reasonable 5% ABV it hit the spot just right on a Sunday afternoon. So right in fact that I had another to go with my lunch.

Not only were there new beers on the menu, but several interesting food dishes were new as well. We started with a shared appetizer of Poutine; house-cut fries topped with Rocko’s Milk Stout gravy and cheese curds. After that I ordered a "Hot Brown." This is an open faced sandwich of braised pork, oven-roasted tomato, applewood-smoked bacon, cheddar cheese sauce, and a fried egg served on toast. 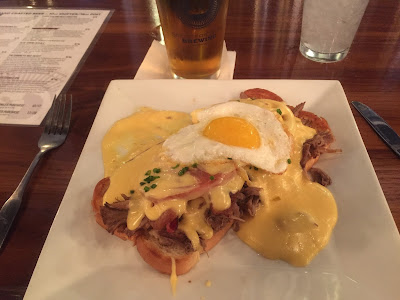 Piled high with braised pork and bacon, this brunch menu item was a belly-buster for sure. Every ingredient, pork, bacon, cheese, tomato and egg provided its own flavorful contribution to the platter. It was far from a "light" meal, but I enjoyed it thoroughly, right down to scraping the last bits of cheese off the plate with my finger.

As usual, we had a good time a Spencer Devon. The beers are always good and the food menu boasts flavorful accompaniments to the fine ales.