For a day in February, Saturday morning was surprisingly warm and sunny. Seventy shooters took advantage of the warm weather to come out for the February IDPA match at Rivanna Rifle and Pistol club. The grounds were wet and exceptionally muddy, which called for some last-minute changes in the planned stages. Despite the adverse range conditions, the Match Director adapted and gave us a fun match.

All four courses of fire were "stand and shoot" stages. I've had a lot of range time recently, time which was spent standing and shooting, and have been quite pleased with my practice sessions. Unfortunately, that success didn't carry over to this month's competition.

The first stage we shot was the proverbial "zombie apocalypse" scenario. A hoard of cardbordians had been turned and required a single headshot each to neutralize. I've done a lot of head shot practice recently, so was disappointed to have needed several makeup shots to complete the course of fire. Even so, I left one target "alive", when I looked across the back row I saw a shadow from a loose paster and called it a hit. 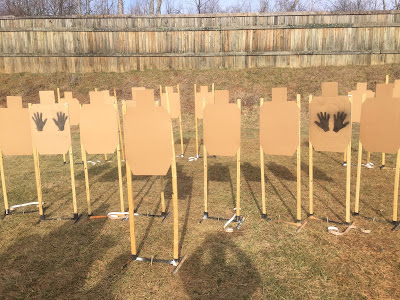 Next up was a long-distance stage. Four targets out at 20 yards were fronted by two non-threats, and there were also two six inch steel plates joining the array. While waiting for my turn at the stage, I was actually looking forward to shooting it, although I noticed the non-threats already had a lot of pasters on them. While shooting, I felt like I was very aware of my sight picture, and even hit the steel plates within what I considered a reasonable number of tries. (That means I still had ammo left.) Alas, the first words from my squad mates was, "You went really fast." It didn't feel that way, but the hits on non-threats and Failure to Neutralize penalty proved they were right. Live and learn.

The next stage had four open targets, to be shot three hits each in tactical sequence followed by a head shot on each. It felt a lot like a USPSA classifier stage. I was pleased with my shooting on this one. The last stage started seated, with the unloaded gun in a lidded box and all magazines on a table. At the start we stood, retrieved the gun and loaded it. There were three pairs of targets at increasing distances. I did okay until the last target pair, when once I again I was told I didn't slow down for the furthest targets, and subsequently earned a missed.

At the end of it all, this was my poorest finish ever in an IDPA match, and I earned an excessive number of points down. In any event, it was still fun to shoot and visit with friends. And there were lessons to be learned and things to work on in upcoming practice sessions.