Three Notch'd The Ghost of the 43rd

When we picked up food for our in-room dinner last weekend, we stopped in the local beer store for a beverage accompaniment. I was in the mood for a nice hoppy, but low ABV Pale Ale with which to relax after the long day. The store cooler housing the chilled beer had a very limited selection. One of the few craft selections that seemed to meet my criteria was Three Notch'd The Ghost of the 43rd. It was a beer I hadn't had previously so I took a chance on a six pack of cans. 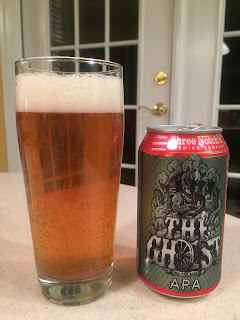 The Ghost of the 43rd is an American Pale Ale that checks in at a moderate 5.1% ABV. My first tasting of the beer was straight from the can. Despite the less than optimal serving method, I enjoyed the crisp citrus hop bite. Later from a glass, I was able to fully appreciate the appearance, aroma and flavor. This Pale Ale pours a bright golden yellow with a frothy white head. The aroma is bready malt with citrus and fruit notes. The flavor is slightly bitter, balanced with tropical citrus hops. There's a hint of vinous grape notes in there too. The finish is crisp and somewhat dry.

I was quite pleased with the serendipitous purchase. The Ghost of the 43rd is a refreshing beer with a pleasantly balanced citrus and bitter flavor profile. It hit the spot after that long day in class, and was even better when enjoyed from a glass, relaxing at home.