Tuesday at the Range

My planned Monday range outing turned into a Tuesday range outing thanks to the winter storm that started off the week. In typical Virginia fashion, the day after we had snow, the temperature rose into the 50’s the next afternoon. Despite the sun outside, when I got to the indoor range folks leaving were complaining about the indoor temperature and their cold hands. (Suck it up, it’s not always going to be a sunny day.)

Last week I came across this 50-round drill from Julie Golob. It’s shot from low ready which works for the indoor range. In addition, shooting rapidly, but safely, is allowed here in a welcome switch from the outdoor range rules. I set up an IDPA practice target at 7 yards and ran the drill strings. Overall it was a good run; I think I'll store that one away to run again.

Finishing the 50-round exercise, I put the target at 10 yards. I ran through most of my second box of ammo putting one or two hits to the body, followed by one to the head zone, each string from low ready. The purpose was simply to work on that quick transition between the two zones. The lesson learned here was that I tended to shoot low on the followup head shots. I’ll do that drill more in the future as well. 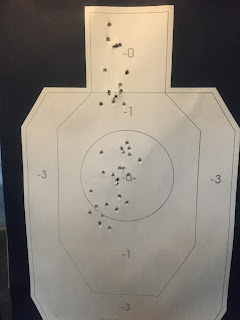 More quickly than I would have liked I had used up my ammo; shooting these drills takes very little time. Knowing how much I enjoy shooting, and how quickly shooting indoors burns ammo, I purposefully put only two boxes of ammo in my bag when I packed the night before. I know that if I bring it I’ll shoot it, so that’s my attempt at self-discipline. (It is Lent after all.) The short and fun range session set me up to handle the rest of the afternoon behind a computer screen.