We've been wanting to pay a visit to Tin Cannon Brewing in Gainesville, VA for quite some time, but have just never been able to make the trip. This weekend, lured by the release of their Big Pun Barleywine, we finally made it out. 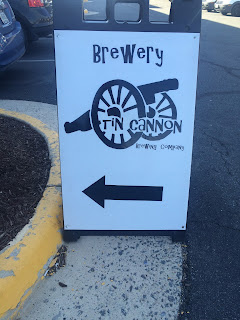 After a fun morning at the range, we arrived at the busy brewpub mid-afternoon and grabbed a couple seats at the bar. There were 10 beers in tap, but we both started with half pints of Big Pun. This big beer checks in at an amazing 11.5% ABV, with a reddish-brown color and thin white head. The aroma is dark fruit and caramel. The rich flavor of dark fruit and mild sweetness is prevalent, owing to the addition of raisins during fermentation. A bitter citrus hoppiness moderates the sweetness creating a well-balanced flavor profile for such a big beer. The alcohol level is well-masked.

After grabbing some "loaded" fries from the food truck out back, we tried some of the other Tin Cannon beers. I ordered a Busted Pipe Black IPA to try next, and it was an excellent choice. The strong bitter hop flavor was somewhat surprising at first — the initial impression was likely influenced by the smooth caramel and dark fruit sweetness of the previous beer. By the second or third sip I was thoroughly enjoying the beer. This is probably one of the most richly flavored Black IPAs I recall having. The persistent off white head led to attractive lacing on the glass, from top to bottom. 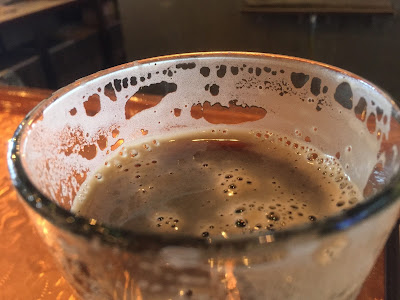 Colleen selected Honey, We're On A Date Belgian-style Wheat as her second beer. The inclusion of dates in the brewing process gives this Wheat beer it's uniqueness. The dark fruit addition is muted but comes through in the finish.

By this time we were quite impressed with the beers at Tin Cannon. We had also happily noted that the brewpub offers its beers on both pint and half pint servings. This is something we've lamented the lack of at many other breweries we've visited over the years. In my opinion there no reason for a brewpub or "craft beer bar" to not offer the smaller serving size. Given the half-pint option, we decided to try another Tin Cannon selection.

The description of the Chocolate Covered Raspberry Stout was intriguing, but also gave us some trepidation. I've tried some other "fruited" Stouts in the past that were much too cloying and syrupy, Robitussin® Stouts is my name for such ales. But we had been pleased so far with the beers we had tried. Colleen noted specifically the raisin addition to Big Pun as a proper use of fruit, so we grabbed a final half pint of the Raspberry Stout.

The aroma was just as the name suggested, chocolate covered raspberry, and the flavor carried on the theme perfectly. Dark bitter chocolate with an undertone of sweet raspberries, fruit not syrup, made for an enjoyable "dessert" for our tasting exploration.

We found the beers at Tin Cannon to be extremely well done and quite tasty. The service was friendly and attentive as well. I found it interesting though not disappointing, that at this time anyway, the ubiquitous Pale Ale and IPA was not part of the offerings. Tin Cannon is brewing beers that are adventurous and approachable at the same time. There were six beers still left untried, but that's something for another visit, a visit we hope to make in the near future.