Most of the snow has finally melted, but unfortunately more frozen precipitation is predicted for early next week. The brief respite from the cold was motivation enough to hit the range and take advantage of the sunny day. I grabbed a few pistols, and a lot of ammo, and we headed out for a good time. 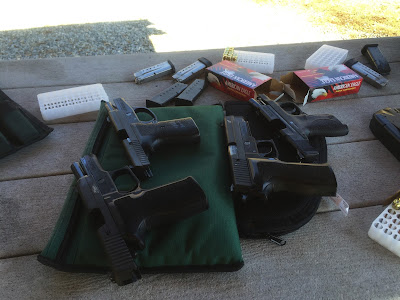 Our friend "Checkered Flag" was also visiting, but rather than the usual routine of drills and games we usually run to challenge ourselves, we all took turns shooting all of the guns and talking about their differences and (mostly) similarities. Shooting three different SIG Sauer guns in one outing only serves to remind me why I'm a fan. As I told CF as we were cleaning guns afterwards, "Not only do they shoot well, they just plain look good too."

It was a beautiful afternoon, and spending time on the range with Colleen and a friend added to the enjoyment. This at was my second shooting outing this week, with one more planned for the weekend. As a bonus to the fun afternoon, we returned home to find that a large order of ammo had been delivered! (Though I am not sure the Fedex driver felt it was so great.) An outstanding week so far, and it's not even the weekend yet!