After a fun but frustrating IDPA match Saturday, I looked to improve the day by watching a movie with my lovely wife and sipping on a strong beer. I knew I had a sample of Flying Dog Single Hop HBC-291 Imperial IPA in the fridge. Having had a number of the brewery's Single Hop beers in the past, I assumed it would be another mouth and mind numbing beverage — just the ticket for that Saturday evening. I hadn't even planned to spend time making notes for a review, until I took a sip. Then I grabbed a quick photo and paid more attention. 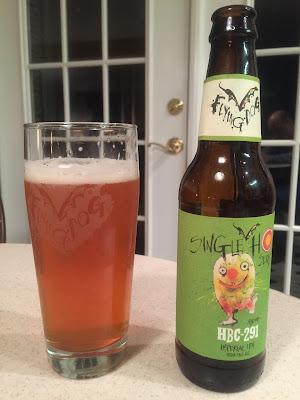 Single Hop NBC-291 pours a bright orange color with a similarly bright white head. Somewhat floral, the aroma has notes of citrus, tropical fruit and caramel. The flavor is mildly sweet but not syrupy; I expected more cloying syrup. The caramel sweetness is joined by mild citrus fruit, backed up by an earthy tone.

I was surprised by this beer. It was less jarring than previous offerings in the Single Hop series. Previous ales in the series checked in at a noticeable 10% ABV. At a comparatively mild 8% ABV, HBC-291 was a surprising, though not at all disappointing offering. When my glass was empty I was somewhat dismayed to not have another bottle standing by.