Back to the Range

I escaped for another lunch-time outing at the indoor range on Tuesday. Approaching the range I noticed a number of Sheriff's department vehicles at the end of the street. Hmm, that might not be good. Fortunately they seemed to be concentrated around the business next door. The range itself was devoid of patrons, just the way I like it. Only one other shooter came in while we were there.

On this trip I was accompanied by a coworker who was having trouble shooting his new M&P Shield. What I saw was the classic "low and left." I offered some free advice and then set out to work on my own shooting. 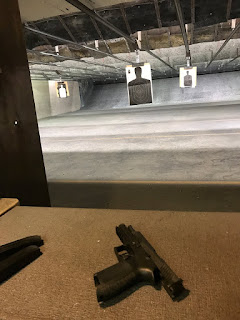 I took along some B-34 silhouette targets, also known as the "ISIS Shooting Drill." Rolling the target out to 15 yards, the order of the day was slow aimed fire. I found I was pulling my shots directly to the left a bit, only slightly but certainly noticeable at that distance. (And I do find anything "left" to be especially offensive.) If I had been shooting at an IPDA or USPSA target, all would be well, but the small scoring rings on this target makes the shift stand out. At the same time, if I really slowed, I could keep them all in the 4" head area.

As usual, it was a pleasant diversion from work. Another 150 rounds was put through the new SIG P320, and I'm still quite pleased with how the weapon shoots.