Last Saturday I travelled with a couple friends down to the Norfolk County Rifle Range in Chesapeake, VA, to shoot the Virginia Indoor Regional IDPA match. This match consists of 10 stages, five of which are shot in the dark. I met my companions at about the halfway point in the drive, and rode along the second half. That made the three hour trip much more interesting.

Five courses of fire were set up, making full use of the club's indoor range. The stages are shot first in the dark, then again in the light, giving 10 stages for the match. Slight changes were made in four of the courses between the dark and light portions of the match. Simple on paper, the stages were deceptive in their difficulty — target placement led to some really tight shots — which led to a few missed shots! 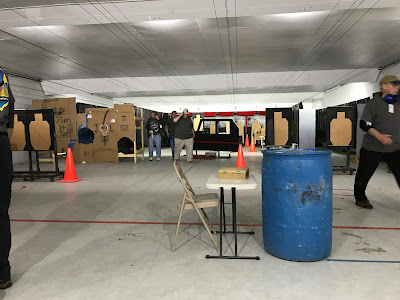 The event was exceptionally well run. Conducting a match in the dark adds complexity, especially with the efforts to keep shooters safe. After a quick walkthrough of the first five dark stages, our group was divided in half. The first half took assigned seats and awaited their turn, while the rest waited at the back of the bay. I had expected low light shooting, but when they say "in the dark," they really mean "in the dark." The staff went to great lengths to block any light from entering the range. After the shooters were seated in their places, the lights were turned out. When it was our turn to shoot, we were instructed to place a hand on the SO's shoulder and with a small red light he guided us to our stage. After the "load and make ready" command, the SO's red flashlight was turned off and we prepared for the beep. After shooting, we were led back, still in the dark, to our seats and the next shooter shot his stage. After the group had shot, the lights came back on and we retrieved our dropped mags and the stages were scored and reset by the SO's. The process was completed for the next group and we rotated stages until everyone had shot all five dark stages.

The process ran smoothly and at no time did I ever feel unsafe. As I sat in the dark waiting to shoot my first stage, I did get a little anxious. It was the first time I had ever shot in the dark and didn't really know what to expect. My mind was running through my stage, "Were there two or three targets there?" Was the non-threat to the left or right?" Once I had the first stage completed, I was able to relax a bit. After everyone had shot all the stages in the dark, the crew made the needed changes to the setup, and the whole process repeated for the light stages. At least now we could see the other shooters as they shot.

Occasionally I momentarily lost my way, and had to quickly scan with the light to make sure I had shot all the targets. At times, my flashlight shifted and I needed to adjust my hold to see the target. At one point, my flashlight was aimed below the port through which were were shooting and all I saw was a wall of white smoke in front of me. When I got to the point where we had to shoot strong hand only, I was briefly baffled, "Wait, what do I do with the flashlight?" My hand went to my chest where it normally would go, before I shifted to the side of my neck.

We shot the entire match in about three hours. The whole process was extremely well-organized and the SO's kept us moving. Our squad dwindled as we lost a few shooters to DQ's, which made the turn around time between shooting even quicker. At times I did feel a little rushed to load mags and get prepped for my next run, but that was probably more me than reality. The staff did an amazing job keeping things flowing, and their experience at running this event was obvious.

I was quite happy with how I shot. I'm not winning any prizes, but I shot better than I had expected, finishing 9th of 21 in my division and 28th of 61 overall. Shooting with the flashlight in hand adds an unusual variable and challenge to making your shots accurately and quickly. I was also concerned about changing mags while holding the flashlight, but in retrospect I don't recall thinking about it during the match.

It was a fun match and I'm looking forward to doing more shooting in the dark in the future. Sadly, that probably won't be until next year's Virginia Indoor Regional.