Our son was able to come home for the Easter weekend. Even though he was here less than 48 hours, we were thrilled that he made the long drive so that we could celebrate as a family. We were sitting around Saturday afternoon talking, mostly about guns, and the discussion turned to a possible range trip. Colleen was planning an early dinner before the Easter Vigil. My part in the preparations involved steaks on the grill, and that was supposed to happen in about 15 minutes. We had several hours still before we needed to head over for Mass. I called an audible to delay dinner and we headed over to the range so he could shoot the new P320.

We set up a couple targets and my college student started putting shots in the center of the target right off the bat. (Sometimes he's annoying that way.) I kept loading and feeding him magazines, and encouraged him to work back to greater distances. He stayed consistent with good hits as he moved. 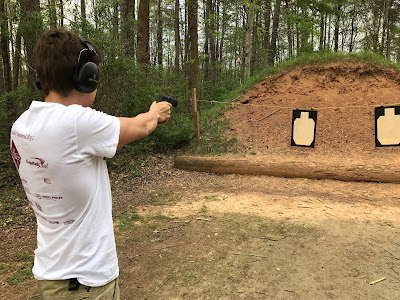 We had also brought along the smaller SIG P239 and he shot that for a bit too. He's been shooting that gun for years, and always enjoyed it. It is indeed a fun gun to shoot and I too bring it out regularly. Quite quickly he ran through the 200 rounds I had packed, though I did take the trigger for about 20 shots.

It was a short but especially fun outing. I didn't do much shooting myself, but the talk time with my son was most enjoyable. We were back home about an hour later, and I quickly fired up the grill. The dish of scalloped potatoes was still warm from the oven when the steak was served. There was even time for a cup of coffee before we headed out for the Easter celebration.