Saturday Afternoon at the Range

In the past week, three attempts at hitting the range were called off at the last minute by work or weather. Once we were literally in the car before being rerouted by downed trees. Other than a quick chronograph session, I've not been able to hit the outdoor range at all this year, except when shooting a match. Any practice with the gun has been limited to indoor ranges.

It worked out on Saturday afternoon that I finished ignored some chores, and headed out to see if I could get on a range and shoot. Surprisingly, despite the beautiful weather, the park was empty except for a lone shooter each of the rifle and larger pistol bays. No nosey range officers in sight either.

I've been telling myself it's time to work on areas that might provide as much fun, but where I see need to make improvements. That includes specifically strong hand and weak hand only shooting. Starting out at 7 yards I shot a few magazines weak hand only, followed by few more strong hand only. I didn't do too bad but I will practice this at 10 yards in the future to challenge myself further.

After taking a few shots at 25 yards, the rest of the afternoon was spent at the 15 yard line. Transitioning back and forth between the two targets allowed me to really start getting used to the new P320. The empty range gave me the opportunity to fire multi-shot groups on each target as well.

Including head shots in the transition drills added variety and an extra challenge. It often seems that when aiming for the head of the target especially, I tend to shoot low. The results were less than disappointing, even while quickly switching between targets. 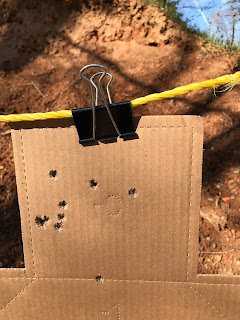 The unplanned trip was most enjoyable. I rarely even attempt to shoot at this range on the weekends, but I'm glad I took a shot (so to speak) on Saturday. I'm pleased with the new gun and will hopefully be able to shoot it frequently in the coming weeks as I want to use it in some upcoming matches. Now I'm anxiously awaiting delivery of the mag pouches and holster I've ordered.