Recently I picked up a new gun I've had my eye on for some time, a full size SIG Sauer P320. I'm an unabashed SIG Sauer fan, but I like the striker fired action of my Smith & Wesson Shield. When the new striker-fired P320 series came out, I was interested, because, well, it's a SIG. I finally bit the bullet, so to speak.

Tired of simply fondling the gun, I made it to the range this week to actually shoot it. There really isn't much to say, except I like it. 😊 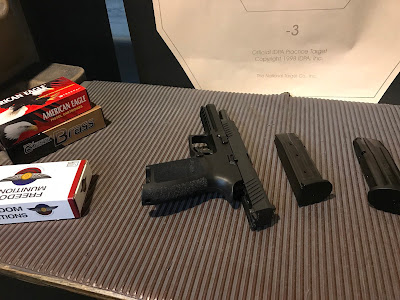 The first thing I did was to shoot groups at some black pasters I stuck to my target, to see where the gun points. Shooting at 7, 10 and 15 yards I found there was little difference from my P226. Next I did some strong hand and weak hand only shooting. My skills in those areas of late leave much to be desired, but I did find the grip of this gun fit my hand very well and it's easily controllable. I easily kept my one-handed shots in the -0 zone at 10 yards.

Finally, I ran the target all the way out to 25 yards. I tend to shoot low at that distance; not having a clear view of the target likely factors into that. At least this time, with some hard focus on the sights, I didn't do any worse that usual. The group was slightly tighter at that distance and well centered on the target. I'm a firm believer in the adage, "It's the indian not the arrow," but I do like the stock trigger on the P230, and that may contribute to the improvement noted.

That all said, the real test comes with time — with more shooting, at a faster pace especially. I expect many more trips to the range in the coming days and weeks.

There is a downside to adding a new gun to the mix. Now I'm ordering extra magazines, and mag carriers, and holsters...