A Better Way to Do Lime & Beer

We spent a relaxing Saturday afternoon enjoying a few tasty beers over at Strangeways Brewing. As they do on many weekends, the brewery had a number of new releases on tap, which we specifically went to try out. Besides the new beers, there were a few other beers that sounded interesting, so we tasted a few samples to start.

The folks at Strangeways are very open to giving a taste of a beer before you order. If you are debating between two, they offer small tastes of each. This is good business in my opinion, especially with their large, diverse, and sometimes strange, selections. I've been in other local breweries that charge for even a sample. After a few sips and discussion, we decided on our first, and second beers.

We started with two very different beers, but both of which included lime in the ingredient list. Colleen opted for Everlasting Light Lime Kölsch while I chose the darker Key Lime Cantilever Dark Ale. 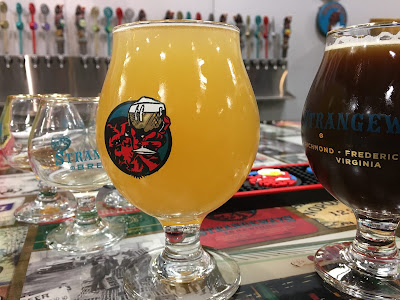 The Kölsch was a very crisp and refreshing beverage. The added limes and kaffir lime leaf added a tart pop of flavor to the beer. It was not overly sour and quite quaffable. My Dark Ale went down easily as well. The beer blends the malt sweetness of a brown ale with the roasted malt and hop bitterness of a Black IPA. The touch of lime in the finish further enhances the unique flavor.

I also tried a sample of the regular Cantilever Dark Ale. This too was a tasty beer, and I briefly debated between the two. I chose the Key Lime version for the slightly unusual enhanced flavor profile. I've often said that the only reason to add a lime to a beer (I'm looking at you Corona fans) is to kill the skunked flavor of the beer. In the case of the Strangeways beers, the tropical citrus served as a flavorful addition, not as a coverup.

We continued our fruity exploration with Nana Jeanne's Peach Cobbler Belgian Strong Dark Ale in Colleen's glass and Comfortably Plum American Sour in mine. The Belgian Dark Ale offered, again, a twist on the classic style. The peach was subdued, adding just a hint of fruit sweetness. The Plum Sour treated with a blast of tart fruit flavor. It went surprisingly well with my spicy quesadilla lunch.

I am an unabashed fan of strongly hopped beers, but at Strangeways I tend toward the fruit and sour beers in my pursuit of robust flavors. However, intrigued by the descriptors of "dark aroma notes of pineapple, mint and mango" I concluded my visit with a glass of another new release, Work Jorts IPA. The beer had a some bitter citrus notes and a hint of green leafiness. I added this one to our "to go" list we had in the works.

And what's flavorful beer without flavorful food to match? The Phat Yummies food truck was on hand to satisfy the food cravings. A couple of tasty quesadillas made the perfect accompaniment to the liquid libations.

Before we left, we had a few more decisions to make. It's a holiday week, so we grabbed a few 32 ounce crowlers to go. Our list included three of the aforementioned beers, Everlasting Light Lime Kölsch, Key Lime Cantilever Dark Ale, Work Jorts IPA, and one more we had only sampled, Orange Cream Banana Clipper Hefeweizen. Those cans will keep for a while, but we'll get to them soon. Real soon.