It's been a while since we made it to the monthly match at Sanner's Lake in Lexington Park, MD. The past two I've signed up for have been rained out, so Saturday's unseasonably cool, and dry, forecast was a welcome sight. (And something I checked frequently in the days leading up to the match.) As I drove past the farms en route to the rendezvous to pick up my shooting accomplice, I noted the car thermometer read 68° and the corn stalks were moving in the breeze. It was going to be a pleasant day.

The Sanner's Lake puts on a remarkably well organized match with six quick and fun stages set up. The first stage we shot had a long wall across the bay with targets to be found at both ends and in the middle. Starting with a turn and draw we engaged a couple of targets before moving to a narrow opening in the center. From there we shot paper targets and two falling steel poppers. Continuing across the stage we made a hard lean around the wall to finish on a distant targets placed back across the middle of the stage. Shooting just -3 made for a good warm up. 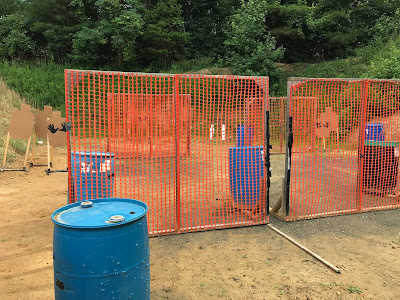 Next up was an interesting array of targets we engaged while standing behind a barrel, with some leaning or small shift in stance required to open up some of the shots. Three threat targets were set behind two non-threats. The center target was placed upside down, with the head just peaking out below and between the penalty targets. The requirement was to have four body and two head shots on each target, and all magazines were downloaded to just 6 rounds. There were several things that played with my head on this stage.

As I fired my first string of six, two each across each target I put two tight shots in the upper portion of the center target and immediately thought, "D'oh, that target is upside down!" I knew right there I was already down 2 for the stage. I reloaded and the second mind game hit me, and I found mysef thinking, "Was I supposed shoot SHO or WHO?" That is often the case when we have these downloaded stages shooting the same targets after the mag change. I took my next six body shots on each, this time placing them all correctly. After the final mag change I finished with the head shots. Made them all, but also nipped the bottom of a non-threat. 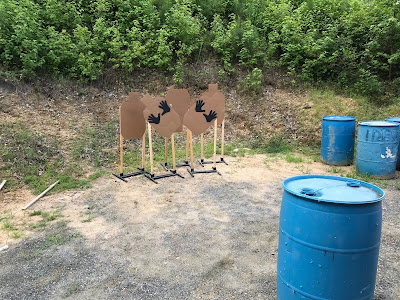 Stage 3 started with a short run to cover where we engaged two distant targets, again with a menacing non-threat placed in front. Three close targets were shot through a port, before we moved to finish with two more targets from cover. Hitting the targets a bit too wide while avoiding the distant non-threat, I was 5 down for the stage, all on those two far targets.

The next stage provided another chance to strategize. Standing behind a barricade, we had to engage five paper and two falling steel poppers, using priority from either side of cover. Again, all magazines were downloaded to six rounds. That meant if I shot everything clean, I'd only need to do one reload. I finished confidently, and as we began to score the SO asked, "Did you see that steel?" To my frustration I had left one of the poppers standing. I had called the shot good. I had heard the ping. But I apparently only nicked the steel. If I had noticed the miss I would have needed to perform another reload; since my reload is much faster than the 5 second penalty, it would have been a good tradeoff. I guess I should remember to look at the steel.

Stage 5 also included falling steel and may have been my favorite run of the match. Starting at a close target, we fired six shots on it while retreating around a wall towards a center opening. At this position we shot a steel plate which activated a swinging arm holding two non-threats placed in front of three steel poppers. The poppers had to be knock down during their intermittent exposures. Hitting everything one for one meant having one round left before moving to the next point of cover. There was a lot of discussion about intentionally missing one steel to go to slide lock. For me, and many others, there seemed to be no issue with that miss coming up on it's own when trying to hit the steel too fast. :-) The stage ended on three targets, again fronted by two non-threats. I was happy to shoot the stage just one point down. 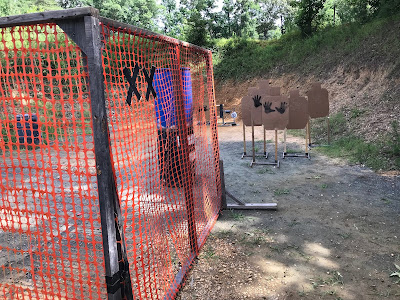 The final stage was shot while seated. The unloaded gun and all magazines were on a table in front of us. We began the course of fire by pulling a rope to activate a swinging non-threat which moved between an array of three targets in front of the table. To either side were more targets, with non-threats present as well. All targets were to be engaged with one head and two body shoots. All the target groups were of equal priority so there were many theories proposed on the best timing of the shots to avoid the swinging penalty target. I opted to shoot the center group first, then move to the sides. When I made the last head shot in the center group, I had a brief thought that it may have been a miss, and even more briefly thought to go back. Alas I did not and finished the stage -5 due to that miss.

I was generally pleased with how I shot on this day. The one HNT and two misses contributed about half of my points down. I still managed to finish 8th of 47 Overall, 6th of 22 in SSP, and 4th of 6 in EX classification.

While the courses of fire were not overly complex or extravagant, they did test a variety of skills and offered some challenging shots. What they also did was make you think. (And that's where they often trap me.) You had to be cognizant of target engagement order, work with the timing of the movers, and watch for temptingly placed non-threats. It was an extremely fun match, made all the more enjoyable by the unseasonably nice weather. We started shooting at 9:00AM and were driving away from the range before noon. After quick stops to shop for distilled beverages and lunch, I was back home in plenty of time to, well, do nothing except sit on my porch and enjoy the wonderful weather.


More photos of the stages are here.