Most of my dry fire practice takes place indoors. Since the majority of that is working on draws, reloads and trigger manipulation, hanging some targets just about anywhere in the house suffices. Lately, I've been wanting to devote time to movement and wide target transitions, both of which are more difficult in a confined area. So I moved to the backyard. 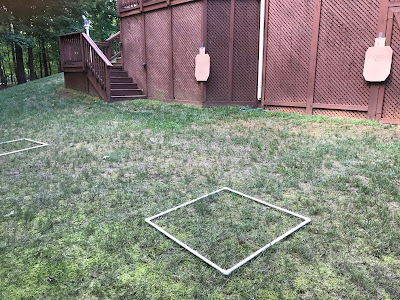 Hanging a couple targets from the deck, and laying out a couple of shooting boxes, made for a suitable practice area. I was little concerned about raising the notice of the neighbors, but a quick scan revealed plenty of tree cover. On future sessions I think I'll breakout the target stands and a barricade too.

As a bonus, the sweat rolling into my eyes added another element of match shooting realism.