I spent most of last week in Washington, DC, stuck inside a hotel. Seated in a meeting, I was using the Untapped app to see if there was anyplace nearby for good beer. A listing for Rebellion DC popped up, and I noted the tagline, "Bar, American Restaurant, Burger Joint, Whiskey Bar."

Checking out the website I noted they claimed some 300 Bourbons and Whiskey's. Reviewing the online menu, though it was outdated, five different vintages of Pappy Van Winkle Family Reserve Bourbon were listed. I also remembered that a coworker was a fan of said spirit. So, plans were made, and we ventured over to Rebellion one evening.

Arriving and taking our place at the bar, I was thrilled to see the extensive display of bottles behind the bar. But, where to begin? In this case, we both opted for Pappy's. My companion ordered the 20 year old, while I was slightly more budget conscience with the 15 year offering. The higher proof of the 15 year Bourbon is noticeable, especially compared to the 20, and it was quite an enjoyable libation.

We started a discussion with the bartender, asking about interesting recommendations for our next pours. He told us about WhistlePig The Boss Hog IV - The Black Prince. 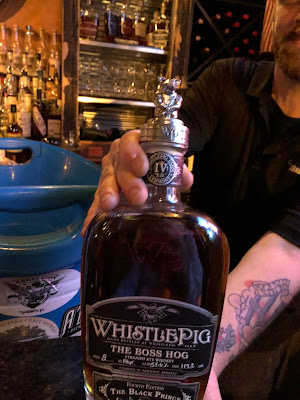 The online reviews we checked were quite favorable. This unique rye won Best Whiskey at the 2017 San Francisco World Spirits Competition. At the prices I saw online, I'll likely never indulge in a full bottle, but a single pour, why not? I thoroughly enjoyed this one. Despite the 119.2 proof, this was a smooth and flavorful drink.

A long day behind us, and an early start ahead of us, we called it a night. After so many meetings and conferences in DC over the years, I am glad I finally discovered this unassuming bar with the amazing whiskey offerings. The libation selection is outstanding and the staff was friendly, attentive and knowledgeable. It was a very enjoyable diversion from the business of the week.

On our Uber ride over to Rebellion, we noted that we passed by the hotel where we hold our winter meeting each year. Plans are being made for a return visit...