I have mixed feelings about this week's practice session. It's probably best summed up as "Well, almost."

I started out with some SHO and WHO shooting at 10 yards. That part of the afternoon I was especially pleased with, despite not having practiced those skills in a while. Following that, I hung a target at 20 yards to get in the distance practice that I had skipped last time. After the first magazine I pulled the target in close enough to see the holes, and noted I was shooting low. I adjusted my aim fore the next 40 rounds and saw a lot more centered holes. At the distance it's hard to focus on a specific spot on the target so I wasn't expecting touching groups, but still need to work on tightening it up a bit. 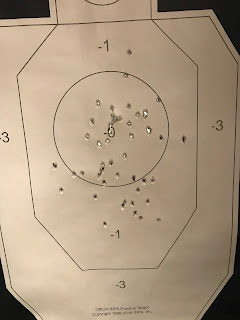 For the last third of my 150 round allocation I decided to have another run at a fast Julie Golob 50 round drill. I did this one at 10 yards and tried to shoot it as quickly as possible. I had the same issue I typically face at the indoor range; the head shots drift low. I am not sure if that's due to the target being set higher than typical or if I subconsciously shy away from the target hanger. Sometime I should hang the target much lower on the cardboard and test that theory. (Did I mention lately how much I miss having an outdoor practice range?) 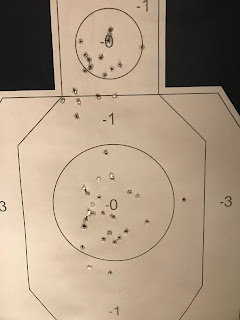 Still, any range time is good range time. Adding to the enjoyment, my son is finally home for the rest of summer and accompanied me, as he'll hopefully do often this summer. I enjoy shooting with him, and it's fun to have company for the drive. And now I also have some ideas for the next practice time at the range.