I headed out early Saturday morning for the monthly match at the Rivanna range. Rain was forecast for the afternoon, but if the prognosticators were to be believed, we'd have good weather for shooting.

We started off facing a simple line of eight targets. However, looking behind them, we found three non-threat targets positioned to catch "shoot throughs" if one was not careful. Shooters could engage any of the targets from either, or both, of two shooting boxes. Many took a conservative route and shot from both positions to take advantage of the safest angles. Since I was feeling bold, I opted to shoot all the targets from one box, adjusting my lean as necessary. 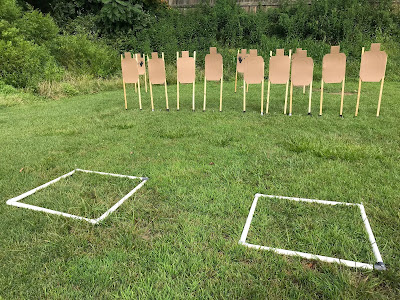 I couldn't see for sure if the non-threats were clean from my shooting position. I anxiously awaited the squad in the adjoining stage to finish so we could move forward and score. The plan worked, I hit no non-threats and finished -3 points down.

The next stage had us facing some distant targets from either side of a wall. A parallel wall down range offered closer shots at some of the targets. Shooters had the choice of shooting all targets from either end of the further wall, or using time to move forward to take closer shots on some targets. There was a head shot only target that tempted many shooters to the closer position. In another moment of boldness, I opted to shoot all the targets from the more distant wall, saving the time involved in moving up range.

When I hit my position to shoot the head shot target, the angle I needed to shoot from was greater than I had felt during the walk through. Despite my earlier confidence, I didn't feel I was getting a solid aim. And indeed, despite slow fire, I did miss one of my head shots. In retrospect making the run to the second wall may have paid off. Disappointingly, I tagged one of the non-threats as well. This stage became an exercise in "shaking it off." 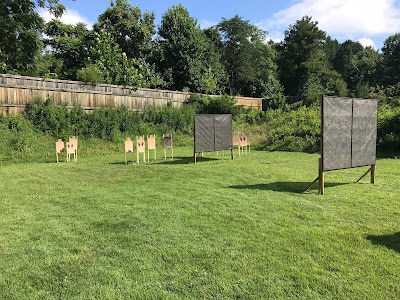 Stage 3 was a "standards" stage with three barrels arranged in a large triangle, and three open targets set down range. A magazine downloaded to six rounds was placed on each barrel, and the empty gun holstered. The stage description called for loading the gun at each barrel, and shooting the three targets "one the move" from each position. The latest IDPA rules prohibit any penalties for not moving while shooting, even if the stage brief calls for it. It is up to the shooter, knowing his own skill level, to make the determination of when shooting on the move is beneficial.

For this particular stage, the best option for the "game" would be to run quickly to the next position and shoot while standing. Of course, doing so left the shooter facing good natured shouts of "Gamer!" from his squad. While I did make a fast run to each position, I found myself taking the shots while moving into place. Old habits are hard to break I guess. Even though I dropped five points, I finished the stage 3rd overall. 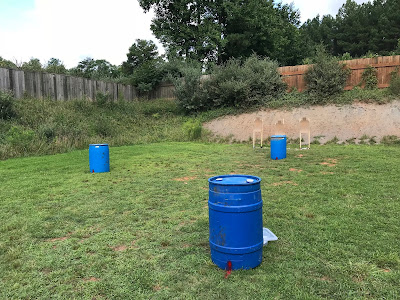 The fourth and final stage was an interesting course with six targets, all requiring 3 hits each, placed among several walls. All of the targets were either partials or blocked by non-threats, or both. After engaging two up-close targets we retreated to four other shooting positions to shoot a single threat target at each. There were as many options for shooting order as there were targets, and shooters differed in their approach. I opted to move left to right in the middle, then right to left at the back. Though adding a couple extra steps, it put my standing reload at an "open" head shot and I finished on a tight leaning head shot with ammo to spare if needed. One low shot had me -1 for the stage for a strong finish to the match. 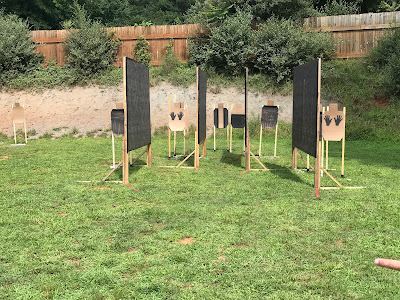 The predicted rain held off long just enough to complete the match and get on the road. It started sprinkling shortly after I began my drive home, becoming heavy from most of the drive. Despite a few miscues, I was pleased overall. I remembered a few things from the class last weekend, but still need to get in practice to tune and ingrain that training. The final score had me 5th of 45 overall, 4th of 19 in SSP and 2nd of the 3 shooters in SSP EX. It was a very fun morning of shooting and enjoying the company, and banter, of friends.