George Washington's Distillery And Other Tidbits

Here's a bit of trivia in honor of the Washington's Birthday holiday.

First, officially it's NOT Presidents Day. That's a name apparently adopted by the retail industry to promote sales. The official federal holiday is Washington's Birthday. In Virginia, the day is known as George Washington Day.

George Washington established a distillery at his Mount Vernon estate. He was once the nation's largest distiller in 1799, making over 11,000 gallons of whiskey. The distillery has been restored and is open for tours. Our first president was also a brewer of beer.

Colloquially, this day is called Presidents Day in order to also honor other U.S. Presidents. Some states, and most retailers include Abraham Lincoln in today's celebration. Abe Lincoln it seems had a connection to the distilled spirits as well. At one point in his life Lincoln operated several taverns in Kentucky.

Even Thomas Jefferson got into the act. At the President's historic home Monticello, visitors can buy a beer inspired by a recipe created by Jefferson.

Unfortunately the other denizen of that great presidential monument, Mount Rushmore, Theodore Roosevelt, worked hard, though unsuccessfully, to restrict the sales of alcohol during his term as Police Commissioner of New York City.

In addition to guns, our great country has had a long and successful connection with alcohol production. It seems we've done okay, until the prohibitionists started interfering in both industries. 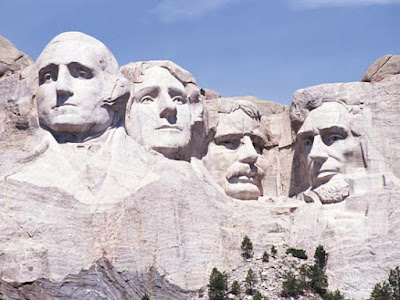