On December 7, 1941, "a date which will live in infamy," the United States was attacked by the naval and air forces of Japan. The attacked killed 2,400 service men, women and civilians. The next day President Franklin D. Roosevelt declared that the U.S. was at war with Japan, and our nation entered World War II. Today as the numbers of surviving WWII veterans dwindles, it is important to keep their memory alive, and recall how a strong, united, nation responded to this act of aggression. Japan was eventually devastated as a nation, and America's dead were not lost in vain.

On September 11,  2001, a new generation experienced a brutal attack on our nation by another enemy sworn to our destruction. America has yet to find the resolve to defeat that attacker. In 1941 our leaders avenged the attacks. Today our leaders apologize to our enemies for offending them. In 1941 we responded by going after those responsible. Today we respond by restricting the rights of our own citizens.

Today, let us pause to remember the American heroes who defended our nation after the unprovoked attack on December 7, 1941. 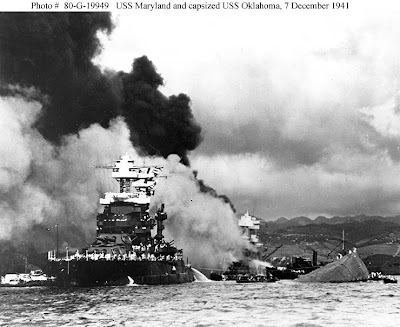 Email ThisBlogThis!Share to TwitterShare to FacebookShare to Pinterest
Links to Related Musings: History, Terrorism, This Day In History