Lee's Retreat, at the Blue & Gray Brewery, is expanding its Wings menu. They are deciding between four new flavors, and gave their patrons the opportunity to vote on their favorites, in the "Iron Wings Competition." We stopped by for lunch on Saturday and got in on the last day of voting.

The free sample plate included a couple of wings and samples of the four new flavors. After finishing the wings, we finalized our choice using the finger-dipped method. The flavor choices, clockwise from top in the photo, are:

The Asian Coconut Ginger sauce had a nice spicy flavor in the finish. The Spicy Red Pepper Pesto was a spicy, thick sauce. The Glaze Maple Mustard Sauce featured sweet maple syrup. The last one, Colonel Mustard, featured tangy mustard. All of the sauces were quite good, but we could only vote for one. It was a tough choice, but in the end, both of us selected the Spicy Red Pepper Pesto as our favorite. Perhaps the pub will relent and add more than one new wing flavor to the current roster of Spicy Blue Buffalo and Chicken Stonewall Wings.

I'll update this post when the winner is announced. 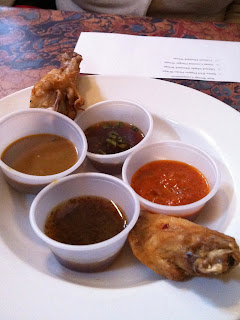