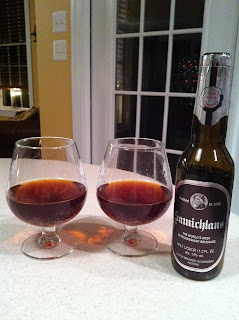 After the Christmas Vigil Mass, Colleen and I relaxed with a 2006 bottle of Samichlaus Bier. I've set a few bottles of this once-a-year release aside each year since 2006, and decided Christmas Eve was a good time to break out one of the oldest.

At 14% ABV, Samichlaus is a good candidate for aging. In fact, some say it's mandatory. The beer in this bottle was brewed, per tradition, on December 6, 2005 and aged for 10 months before bottling and release. The beer pours an attractive, translucent dark copper color, with no head whatsoever. The aroma is brandy-like with hints of raison and plum. The flavor follows with dark fruit and sweetness. Even with the high alcohol content, the alcohol is not noticeable. However I would be lying if I said I didn't detect a pleasing warmth growing inside as I sipped. The aging really serves to smooth out the flavor quite nicely. This is the perfect sipping beer.

We brought out some homemade maple sugar candy, along with cheese and crackers. This was a great way to kick off the Christmas Feast.