This month's USPSA match at Fredericksburg Practical Shooters was a "Classifier" match, with 4 classifier stages and two field courses. Many of the USPSA classifier stages are "stand and shoot" stages but this event the match directors picked ones that I thought were especially interesting and challenging. Since the stages for next weekend's Area 8 Championship Match are being set up, the monthly Fredericksburg match was worked in around that activity. The two field courses made use of some of the stages for next weekend's event, with targets placed among those props. (Stage photos in Flickr Album here.)

Like most summer Fredericksburg matches, the day was seasonably warm hot. However, in a switch from what is typical, we were treated to a nice breeze much of the day, complete with refreshing strong gusts on occasion. Although, at one point my sunburned neck was unpleasantly abraded by cloud of wind-borne sand. Interestingly, my squad include two father and son pairs, and a husband and wife — this really is a family sport.

Our squad started with "Mini-Mart." The loaded gun and magazines are placed on a shelf under the table. A Virginia count stage, no extra shots are permitted. Each target gets two shots, then a mandatory reload followed by two more shots one each target. I fortunately placed two mags on the shelf even though only one is was needed. When I reached for the magazine I knocked it to the ground and had to go for the spare that was fortunately there.

Next up we shot one of the field courses, "Why Not." Ten targets were hidden among the walls setup for the upcoming Area match. The targets were placed such that they weren't visible without the shooter moving around quite a bit. I had one miss on this stage. When I shot that particular target I suspected I may have pulled the second shot, but didn't decide quickly enough to make it up before moving on.

Next up was "Raw Deal." The shooter started seated, with elbows on the table and holding a playing card in each hand. At the start signal three targets are engaged, followed by a mandatory reload, then the remaining three targets. This stage is also scored Virginia Count, which means no makeup shots. The furthest target was 40 feet from the table so careful aiming was called for. 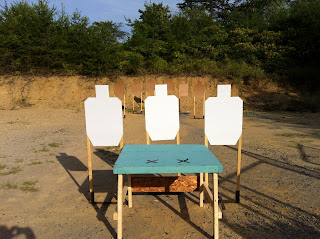 The second field course, "Barrel Race," featured targets placed among walls and barrels around the perimeter of the free fire zone. As an interesting twist, the stage started with the unloaded gun placed on a barrel at the start position. The shooter strategically placed all magazines he would need on top of barrels which were staged around the course, and all reloads were done by grabbing mags from the barrels. It was very fun stage requiring lots of running. I found myself reaching for my belt during the reload even as I was looking at the magazine on top of the barrel I was approaching. Old habits.

Next up was undoubtedly the most interesting and complicated classifier stage I've done, "Color Blind." Many shooters were surprised it was actually a classifier. The designer of this "test" made use of a smorgasbord of options and props. The starting position was seated in a chair, with legs extended under the table and crossed at the ankle. Arms were folded at the chest. The loaded gun was placed in the center of the table. At the start signal you had to lean forward to retrieve the gun and shoot at three head shot targets, aiming under a low barrier. Next the shooter moved to a door to be swung open, through which three more targets were engaged. That completed, the shooter ran to a low barrel port and shot at three partial targets through the barrel. It was a fun course of fire that offered a variety of shooting positions. 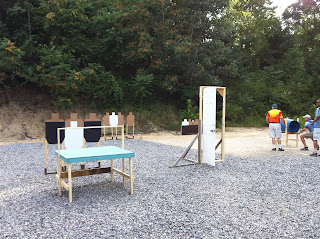 The final stage was "Big Barricade" which consisted of 7 targets arranged in an inverted "V" behind a barricade. All of the targets were partially covered by "no-shoot" targets. As I reloaded and moved to the other side of the barricade to the engage the last four targets, I missed getting a hit on the furthest right target, giving me my second miss for the match. The size of the available target area was a bit deceptive as we were shooting it at an angle. Several shooters ended up with misses on this particular target.

Even though I helped to set up the match on Saturday morning, seeing it for the first time fully set up on Sunday, with the targets in place, was interesting as I hadn't realized just how many "no shoot" targets were being staged. While I finished, again, about in the middle of the pack, at 52.182% match percentage, I felt a lot better about my shooting this month. I'm pleased that I no "no shoot" penalties and just two misses for the entire match. Once the scores are posted to the USPSA results page I'll be able to look at each stage in detail to get an idea of what was good and what was not. The interesting stages, the cooling breezes, and a fun squad of shooters combined to make a very enjoyable match.

Back home afterwards, I relaxed with a cool pint of Loose Cannon Hop3 Ale from Heavy Seas Brewing, while I started writing up my thoughts on the match. I thought the name of the beer was especially apropos to follow a day of shooting. The evening was capped off by throwing some very thick steaks on the grill for a tasty dinner. All in all a wonderful way to end the weekend.