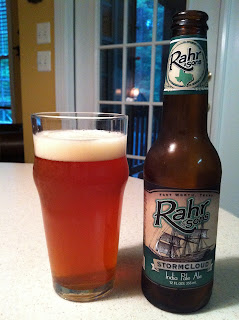 I was staring at the beer fridge Friday and spied a forgotten bottle from the beer trade with 45er. Yea! I still had a couple of those Texas beers, so Rahr & Sons Stormcloud IPA became my choice for some end of the work week relaxation.

Stormcloud IPA pours the typical IPA copper-orange color. The head was noticeably slow to build, and it quickly dropped to a fairly thin, but persistent layer. The aroma of the beer is quite mild, with sweet bready malt and a hint of pine. The malt-rich taste is accompanied by a resinous pine flavor. The mouthfeel is creamy and leaves a sweet coating behind.

The flavor of this IPA avoids either extreme often found in the style, being neither citrus-rich, nor cloyingly sweet, but falling somewhere in the middle. At 6% ABV, it's relatively low in alcohol for an IPA as well. Overall, it's a pretty mild representation. The Rahr & Sons website describes it as a "German-Style IPA- a traditional India Pale Ale with German Influence." That means some German malts and hops I presume, which must serve to give the beer it's different character.

While probably not one I'd pick up regularly (if I could) it was still an enjoyable libation. As with all the beers received in the trade, this isn't one we are able to buy in Virginia. I enjoyed the opportunity to explore a new beer and get another taste of what my fellow beer fans are enjoying in another part of this great, and diverse, country.