Earlier this month the folks at Lucky Gunner sent me a couple of boxes of PMC Starfire .380 Auto ammo for review. I finally got around to hitting the range with it this week.

Two other members of the Gabriel Possenti Shooters helped out with the shooting and subsequent review. We had three small pistols with which to try the Starfire rounds; a Walther PPK, a Bersa Thunder and a Keltec P-3AT. We all took turns firing the Starfire ammo, along with some "plain" full metal jacket rounds for comparison, through each of the weapons. 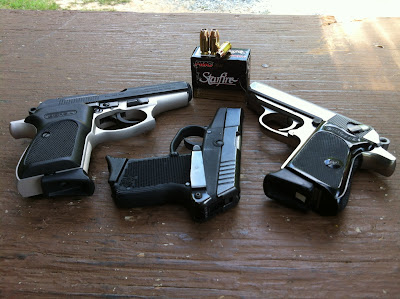 The immediate impression from all the shooters was how soft the recoil from Starfire rounds felt. The difference from the FMJ ammo was significant. Shooting these small guns is not the most pleasant experience in general, but it's quite bearable with this hollow point ammo. It's important to practice regularly with any carry weapon, and the reduced recoil is conducive to regular practice. Granted it's not as inexpensive as FMJ ammo, but you're not going to be firing hundreds of rounds in practice either, just enough to remain proficient. I know many folks carry full metal jacket rounds in their .380 pistols, however the reduced felt recoil may be beneficial when you are shooting to protect yourself or someone you love.

The Starfire ammo fired and cycled without any problems in all three guns. One of the shooters concentrated specifically on accuracy, from 5 - 7 yards. He commented the ammo was very accurate and produced nice tight groups. Even with a fairly rapid rate of fire, I was able to easily keep the groups within the A-zone. Unfortunately I forgot to bring along some phone books to catch a bullet in order to photograph the expanded round. You can read some technical details on Starfire ammo here.

Lucky Gunner is one of the online sites from which I regularly buy ammo, much to the chagrin of hoplophobes like Senators Lautenberg and McCarthy. Just prior to receiving this ammo for review I happened to place an order for a case of 9mm ammo. (Yep Senators, that's 1000 rounds.) Lucky Gunner ships orders the same or next day, depending on what time the order is placed. I submitted my order the evening of July 2, the ammo was shipped on July 3, and despite the July 4 holiday, it was delivered on July 6. You can't get much faster than that.

The "pocket pistol" chambered in .380 has been in the news recently, so this was a good time to dig out a few of the small pistols and try out this self defense ammo. I know the .380 ACP round has its limitations, but even a small pistol carried is better than any other pistol not carried. After our time at the range with the small pistols and this ammo, one member of our group remarked that they would probably start carrying the Walther again while wearing summer clothes. I expect the gun will soon be loaded with PMC Starfire rounds.


Notice: The ammo reviewed in this post was provided at no charge by Lucky Gunner. The content of the review was written with no compensation or influence from Lucky Gunner. In the interest of full disclosure, this blogger could possibly earn some extra  "ammo funds" if you click the associate links in this post.