Despite experiencing cold winds and even snow flurries the day before, the weather on Sunday was cool but sunny. On the way home from Mass in the morning, Colleen suggested we hit the range for a bit. She got no argument from me! We quickly changed our clothes, loaded the car and headed out. We spent a little over an hour shooting and enjoying the sunshine. There was a noticeable drop in the temperature at the covered bench area as opposed to the open bay. That just meant we reloaded our magazines quickly to get back to the sunny part of the range to shoot.

We spent about an hour shooting. It was a fun way to spend time outdoors, and I enjoyed the time with my wife. I'm typically on the range by myself and was great to have Colleen as company. We went through several hundred rounds and lots of "splatter targets" during the outing. It was a beautiful spring afternoon; the birds were singing and the Dogwoods were blooming. 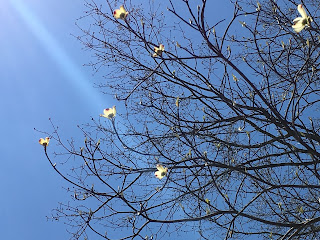 When we arrived home, we were both quite hungry so the obvious thing to do was to head downtown to enjoy a late lunch and a couple of good beers. We opted for Capital Ale House since we hadn't been there for a while. We wasted little time getting our beer and food orders in after working up an appetite on the range.

I got to try out a couple new to me beers, Maine Beer Company Zoe Red Ale and Apocalypse Ale Works Hoppocalypse Imperial Red Ale. (The latter is quite a tongue twister of a name.) I enjoyed both very much, and they went well with a platter of spicy Andouille and Shrimp Pasta. Colleen ordered a very tasting looking Chicken and Waffles dish. I might have to try that next time. 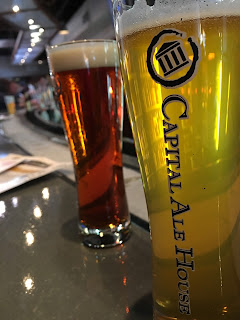 Later in the day, I found myself in my favorite chair, enjoying a good book. Well, at least that was the plan. After the time spent on the range and at pub, the book lost out in favor of a nap. I really couldn't have asked for a more enjoyable day spent with Colleen partaking in some of our favorite activities.