The April IDPA match at Rivanna Rifle and Pistol Club was held this past Saturday. I was looking forward to the match since I had only been to the range for stand and shoot practice for the last eight weeks, no matches. The weather was excellent and, in a change from the winter months, the ground on the range was dry— no mud! The Match Director made sure everyone got plenty of movement in after months of mostly static shooting due to range conditions.

The first stage for our squad was a bit of a novelty stage. Four shooting areas were laid out like a baseball diamond. We started at "home plate" holding a bat which we dropped at the buzzer and ran to "first base" to put one hit on a single target. Next we ran to "second base" to engage two targets with two shots each, and then it was on to "third base" where three targets each requiring three hits. Returning to "home plate" we settled from the run to engage four steel plates placed downrange. I finished with 0 points down for the stage. 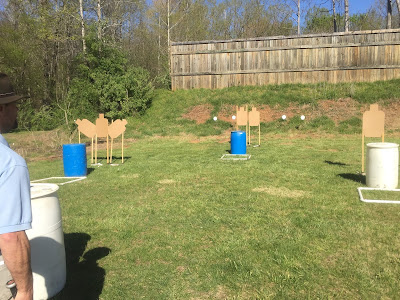 Stage 2 started with the shooter engaging two targets while retreating to cover where two more targets were shot though a port in a wall. Next, while moving across an open area there were two open targets to be engaged and two other targets, requiring a single head shot each. The head shot targets were partially obscured by a non-threat. All four of these targets were to be engaged on the move. I hit the first target with two shots, then moved to the head shots. I made those cleanly and was celebrating in my head as I shot the last open target in a hurry. I saw the two -1 hits and decided quickly to make them up before moving to the last two targets at the final position. Of course those extra shots meant I needed to do a reload to take the last shot of the stage. Overall, the extra two shots and extra reload cost me more time than the two -1 hits would have, but I really wanted the -0 on the stage, which I got.

The next stage was quite interesting, and involved a pickup gun at the start. That loaded revolver was sitting on the chest of "Earl," the match dummy. You grabbed the gun and engaged three targets while dragging Earl to cover. I've only shot a revolver a few times, and that was a "snubbie" a few years ago. Here was a gun I had never shot or even handled. To be shot strong-hand only. While on the move. I knew it was going to be fun.

I was happy to have five -0 shots and just one -1 hit with the revolver. After safely depositing Earl and the revolver we moved to the next position where we had staged our magazines and unloaded gun. Quickly stowing any needed mags and loading the gun, we hit a stomp plate that released a swinger moving between two non-threats. There were also two stationary targets to be engaged from that position. As an added twist all targets after the revolver required three hits each. Lastly, three more targets where engaged from cover at the end of the course. I finished the stage 3 points down.

The final stage involved shooting around, and through, an old car. The targets were placed in various places in front of and beside the vehicle, at varying distances. They all needed to be engaged from cover, and that generally meant a combination of leaning and stooping. I was just one point down on the stage, but struggled to twist my old back into the required positions. (Perhaps I need to learn less contorted means of using cover.) 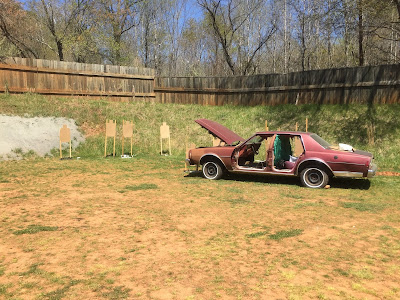 The entire match was a lot of fun to shoot and offered a good variety of challenges. At the end of it all I was just four points down for the match. It felt good to drive away from the event with no regrets about mental errors, and misses or penalties.

This month there was also an optional side match for BUG and CCP guns. You could shoot the five quick strings at any point when you had down time. I shot the BUG match while waiting to shoot the third stage in the main match. I wondered how it would be shooting a different gun right in the middle of the match, and then I ended up shooting the revolver right after the BUG gun. Even though it was technically two matches, it was fun to shoot three different guns in essentially one event. Hopefully the side match will become a regular addition to the monthly event.

After arriving home I cleaned up and we headed out to visit a friend, and some breweries. During the two hour drive to our destination I don't think I stopped regaling Colleen with my recollections of the match. It really was that much fun. I can't wait to do it again! 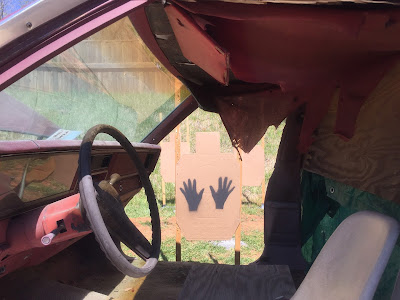