After that super fun IDPA match on Saturday, we drove out to Purcellville to visit a friend and a brewery or two. Our first stop was Belly Love Brewing.

When we walked in, I was surprised at the lack of a crowd, for late Saturday afternoon. We placed our beer orders at the bar, carrying the drinks to a nearby table. None of us had much too eat all day, so we were quite hungry, and ordered a soft pretzel with cheese and spicy mustard dipping sauces to hold us while we perused the food menu further. The appetizer was delivered promptly to our table, and was quickly devoured.

I ordered a Double IPA with an interesting sounding name, Flying Unicorn Crotch Kick. The beer had a strong, bready malt base. The bitter grapefruit and mango flavors were enjoyable and not overwhelming. The beer was flavorful but well-balanced. I expected a more extreme flavor profile, especially given the name. My glass was emptied in short order. 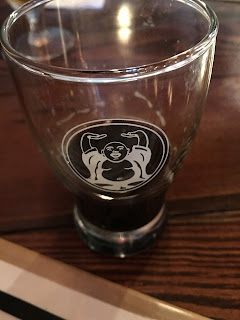 Colleen enjoyed a 6 ounce pour of Brooke's Currant Obsession. Just the fact that a short pour was offered made Colleen happy, though an actual half pint "short pour" would have been preferable. Despite the size, she enjoyed the mild citrus and tart hint to the Porter. Our friend opted for Eye of Jupiter Milk Stout. I stole a sip of this one and found it quite pleasant as well.

The beers we had were very good, and I would have tried more, but the need for food took precedence. The food options at Belly Love all sounded good, and the items we saw being delivered look appetizing as well. However, given that we were all extremely famished and looking for more substantial fare, we opted to look elsewhere for food. We ended up eating at a nearby old-style diner.

Having satiated our hunger, we were now in the mood for another beer stop. Adroit Theory Brewing is another well-known brewery in Purcellville. Checking online we saw that they had closed at 8:00 PM, on a Saturday. We discussed going back to Belly Love for more "research" but decided to head over to Lost Rhino, a brewery we've visited previously. I'm pretty sure a joke was made about needing a Lost Rhino Face Plant to go with my Belly Love Crotch Kick!

Instead of a big IPA at Lost Rhino, I opted for a pint of Dawn Patrol, the brewery's session IPA. As an added treat, the beer was being served from cask, and dry hopped with Simcoe hops. It was the perfect wind down for the evening. BTW, Colleen had a glass of the Lost Rhino Root Beer and it was delicious.

There are still a number of Loudoun County breweries we need to check out. We will have to plan a future excursion, one that starts much earlier in the day. I did pick up a bottle of Belly Love My Bitter X that I look forward to trying that in the near future.