An unplanned dinner out found us at Spencer Devon Brewing on Thursday evening. Unbeknownst to Colleen and I, the brewery was releasing a new beer that evening. I spotted Katina Black IPA on the beer menu and had made my decision even before owner Shawn stopped by to inform us that this was the beer's debut evening. 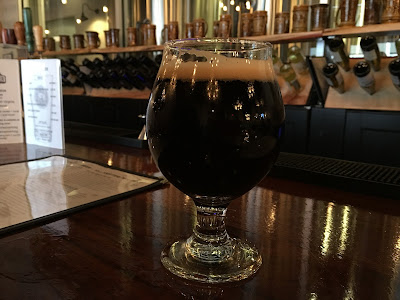 Keeping with the brewery's local attraction naming convention, Katina Black IPA is named for the ghost of a Sioux Princess whose ghost is said to roam Fall Hill Mansion where she served as a nanny to the family before her death in 1777. Ghost tales aside, the beer is alive with flavor. The light flavor of roasted malt is mixed with tropical citrus hop notes. The finish is slightly bitter and the 6.5% ABV beer is surprisingly light bodied and refreshing. I found it quite enjoyable and gave it a rare 4-star rating in Untappd.

Also popular at the brewery this evening was a dish prepared specifically to pair with the Katina Black IPA. I was planning to try some items from the new Spring food menu, but Shawn suggested insisted I try the Rabbit Confit & Queso Manchego Nachos with chipotle aioli and spring onions with the Black IPA. Since my glass was empty when my dinner arrived, I naturally ordered another to do the pairing justice. The spicy nachos did indeed go well with the beer.

We also noted that Spencer Devon has a number of new beer releases coming up. Since we've never been disappointed with any of the brewery's beers, and we still need to fully explore the new menu, I suspect we'll be back sooner rather than later.