We finally paid a visit to Maltese Brewing Company this weekend. The brewery is owned by firefighters, and many of the employees are also firefighters, and this connection is apparent in the pub's decor. The tasting room is small, with just four seats at the bar, with a few tables in a front room and several more in the back with the brewing equipment. We did learn that after less than a year from their opening, the owners are already are making plans to expand into the space next door.

The small space doesn't limit the beers the brewery is pouring. We started with a flight, called a Brigade here, that consisted of all 7 beers being poured, along with a cold-pressed coffee that was served on nitro. The flights at Maltese Brewing come with a small bag of pretzels. That was a very welcome twist which is just one example of the attention to detail the owners offer.

The selections in our Brigade were Fireman's Blonde, Vanilla Brown, Pump Panel Coffee Brown, Amber IPA, Mint Chocolate Porter, Fire Wife Wheat, Pineapple IPA, and the aforementioned coffee. There were no disappointments in any of the beers. Among our favorites were the two IPAs, the Vanilla Brown and the Wheat. The coffee too was quite enjoyable. The flavor of the locally roasted coffee was rich, and the nitro pour made it quite smooth. After our tastings, we debated about our next selection. In the end Colleen opted for a pint of the Pineapple IPA and I went for the just tapped Amber IPA. The flavor of the Amber IPA is a cross between an Imperial Red Ale and an IPA. The rich malt and bitter hop notes combined for an extremely flavorful beer. 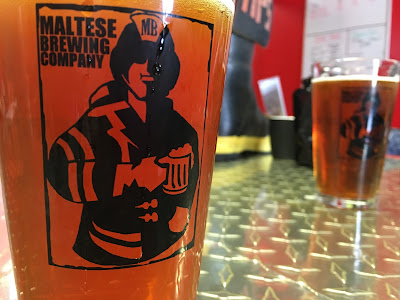 There were menus for a visiting food vendor, Good Dog, on the bar and many patrons were eagerly awaiting our chance to order the "gourmet hot dogs." The vendor was late setting up, which led to much good natured "harassment" of the bartenders. It was all in good fun, and when the food was finally available it was well worth the wait.

During our visit there were a lot of folks coming in to get growler fills. We observed that after rinsing the growlers, they were were purged with CO2 to help preserve the freshness of the beer. This was another example of the attention to detail at Maltese Brewing. I don't see this extra step taken at a lot of breweries.

We had plans to visit a couple other local craft beer stops on this day, as there were a number of new beer releases available. However, we ended up enjoying ourselves so much at Maltese that we opted to forgo the other stops and extended our stay. The atmosphere at the brewery is casual and very friendly. The bartenders were attentive and engaging. That seemed to spread to the patrons as well, and we enjoyed a lot of friendly conversation with others. We had a very enjoyable afternoon and look forward to going back to Maltese Brewing very soon.