A lack of blogging recently isn't an indication of a lack of life activity, just the opposite in fact. It means I've been too distracted by life to sit down and write. We were out of town last weekend, in part to attend the Spring Game at VA Tech. I was pleased we had reservations at the same hotel at which we found good beer last year. Before I even checked in at the front desk I detoured to take a peak at the taps in the lobby bar. I was not disappointed. 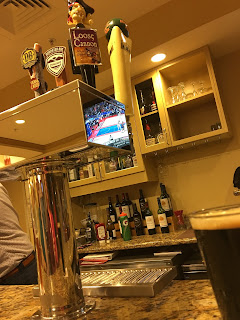 Colleen and I visited lobby bar in the evening to relax over a few beers. Three of the offerings were old favorites, along with one new to me beer. I tried a sample of a local beer, River Company Dumpster Dog Porter, but opted to go a more hoppier route. Colleen enjoyed a pint of the Porter. I couldn't resist a pint of an old favorite, Loose Cannon from Heavy Seas, and later a pint of Bell's Two Hearted Ale.

As we were enjoying our drinks and talking with other guests, there was suddenly a lot of excitement in the lobby and bunch of folks leapt from their seats. Buffalo Bills Quarterback Tyrod Taylor was checking in to the hotel. He posed for a few selfies and things quieted down. For a bit anyway, until Pro Football Hall of Fame inductee Bruce Smith walked in. He too posed for selfies and signed autographs and the lobby calmed once again. Seattle Seahawks player Kam Chancellor also made a pass-through of the lobby.

The commonality among the players is of course, they are all VA Tech alumni, in town for the Spring Game. In all honesty, if it wasn't for the other fans at the bar, and some quick Google searches, I wouldn't have known who they were, not being a big sports fan. Nonetheless, it added some excitement to an already enjoyable Friday evening.