Last Sunday I shot the monthly IDPA match Cavalier Rifle and Pistol Club. Although the weekend weather forecast was not looking so great earlier in the week, the weekend turned out to be very pleasant, and I was looking forward shooting in the moderate temperature and sunny skies.

The Virginia State IDPA match also took place this weekend, and many of the regulars at Cavalier were absent. We had just three small squads of shooters, which made for a quick match. Three stages, with five total strings of fire were set up. The stages were simple in design, but as usual, a lot of fun to shoot.

For the first string of stage 1, we were positioned between a couple of posts facing six targets, with two non-threats. After engaging those close targets we had to turn about 90° to the right and engage a lone target placed out about 15 feet. The positioning of a couple of the near targets meant that head shots were the way to go. Cavalier has the new IDPA targets with the 4 inch -0 circle on the head, and the new scoring area is used in scoring. At least we will all have some experience when the tighter shot requirements become mandatory later this year. 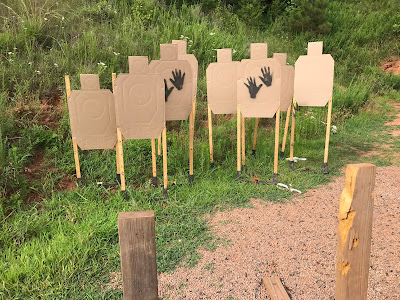 For the second string of the stage, we reloaded off the clock and moved to the next position. This found us shooting from behind a wide barricade. An array of two targets with a non-threat in the middle made up the course of fire. From one side of the barricade we shot one of the targets with two body shots and one head shot. Then moving to the opposite side, we engaged the remaining target in the same manner. I was a satisfying -2 for the two-string stage

Stage 2 also consisted of two separate strings of fire. For the first, our loaded gun was placed in a box. The box and all reloads went on a barrel. After retrieving the gun, we shot four targets, in tactical priority, with three hits each. Target placement essentially mandated three head shots on the furthest target. The second string started from the same position, with the gun and reloads on the belt. There were two paper and two steel poppers. Priority required slowing down to shoot a steel target between hitting paper. These were two more fun strings and I ended -3 points down.

The final stage was very interesting and offered the opportunity to do all shooing from a kneeling position. The loaded gun, downloaded to six rounds, and all magazines were left on our "fallen comrade," on who we were performing CPR. There were nine targets spread out before us. The targets were shot in tactical priority which meant some wide swings, past other targets, between shots. I lost my place momentarily but did hit all the targets, in the right order. One of the far targets was scored -4, something I called while shooting. I couldn't see the holes, but my brain registered that the sights were off, although it didn't register a call to make up the shots. I ended up -8 for the stage. 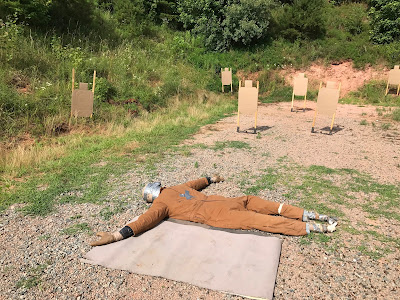 Excepting the down points tally on the last stage, which may have cost me several places in the standings, I was generally pleased with how I shot. I finished 12th of 34 Overall and 7th of 15 in SSP.

Thanks to the small turnout and quick stages we were done shooting, literally, in an hour. The rapidity of the match in no way decreased the enjoyment. The stages were interesting, and fun to shoot. I do regret not bringing along a second gun, as I would have had time to shoot a second time. Instead, I made it home with plenty of time to spare for chores. The first of which, in no surprise to regular readers, was to cut the grass.

The rest of the day's pictures are here.