After missing the last couple matches, I finally made it back to Rivanna for the monthly IDPA match this morning. Due overnight rains, and the threat of more on the way, five quick stages were set up on the two indoor bays.

All shooters shot the same stage to start the match. A single target was set up in both bays for "stage 0." Starting with 3 rounds in the magazine, the target was engaged while the shooter backed up, with a total of six rounds. The target had the -0 zone cut out to save on pasting time. The universal starting stage gives everyone the same "warm up" at the start of the match. I do like the idea of every shooter starting out with the same course of fire. It's certainly better than starting out, by luck of the draw, on a difficult standards stage, as I did last week.

That initial stage done, we began the usual rotation through the remaining four stages. The next stage for our squad, was for me the most challenging in the match. (I am glad I didn't start here!) Starting seated, at the buzzer we moved to low cover behind a barrel. There were five threat targets, partially blocked by a couple of non-threats. Each target required two shots to the body and one to the head, in that order.

Moving to the next bay, stage 3 required three hits each on two targets while backing up. The shooter then moved behind cover to engage two more targets with three hits each. 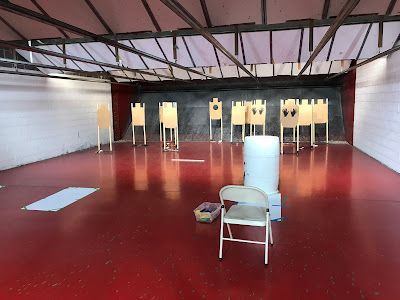 For the next stage we downloaded all magazines to just six rounds. Three targets placed at ever increasing distance were shot from three shooting boxes. Each target got six hits, which meant a slide lock reload after each target before moving to the next position.

For our last stage we found five open targets, each requiring three hits each. The targets were engaged left to right. The first two, and optionally the center one, were shot from the first shooting position, and we moved to a second position to finish the remaining targets.

The quick stages, and smaller than usual crowd, meant the match ran fast, and was over in about three hours. The stage designs overcame quite well the limitations imposed by an indoor range. The shooting was fun and offered interesting challenges, despite their outward simplicity. Overall I was generally pleased with my shooting, despite a few careless shots that earned me 19 total points down. Still, I finished 13th of 41 overall and 5th of 19 in SSP.

Arriving home, I watched an extremely brief rain shower pass by before heading out to mow the grass. Cutting grass seems to be my standard post-match activity of late. Of course, that was quickly followed by a tasty beer on the back porch.