My weekly indoor range time has been subject to interference of late so I was happy to get away on Monday for a brief session. For most of the visit, I had the range to myself, which is an added bonus.

I broke my own rule and didn't have any specific practice routine in mind. I started out shooting at a moderate pace, using the B-34 silhouette target. Focusing on the head area which forced me to slow down and concentrate on a straight trigger pull. 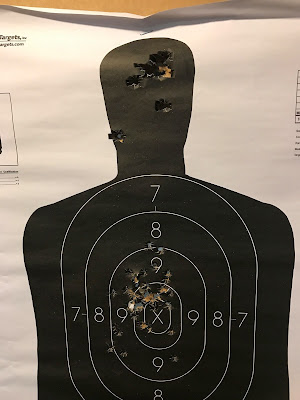 For the second box of ammo, I ran the regular JG50 drill on an IDPA target, with the target at 7 yards rather than the usual 10, but also picked up the pace a bit. My shots were a little sloppy on the body/head transitions, hitting just low on a few head shots.

Finally, I opted to finish on a slower pace, running the target out to 20 yards. I was very pleased with that portion of the practice. While the groups weren't tight, they were all in the -0 zone.

Despite the slow(er) shooting near the end, the allocated 150 rounds were expended in short order. I was at the lane for even less time than usual. Even in its briefness, it was a beneficial session for improving both technique and mental health.