Range Time With Son and SIGs

After foiled by crowds last Sunday, my son and I spent some time on the range one evening this week. The range supplies, excepting guns and ammo, had been left in the car, so it was easy to head out without delay after work. We took along the Full Size and Compact SIG P320's and a bunch of ammo. The next 90 minutes was spent swapping back and forth between the two guns and doing some fun plinking. 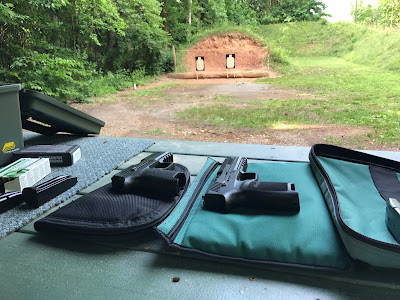 In an exercise that was, at least to me interesting, we also tried out the 9mm ammo in three different bullet weights; 115, 124, and 135 grain. I shoot all three with regularity, but I've never taken the time to shoot them back to back for comparison.

We keep the ubiquitous 115 grain 9mm ammo around for general plinking. When I find a bargain, I stock up. The 124 grain bullet weight has long been my "go to" for match use. The felt recoil is less snappy in my opinion. Recently, I've been also buying the 135 grain 9mm, mainly due to pricing deals. I knew the "snap" was greatly reduced, but when shooting in direct comparison with the others, the difference is substantial. It's certainly a good choice if one is going to be shooting a lot of rounds in a short time.

It was a very enjoyable outing for both of us. Besides the shooting, we got to talk, a lot. About guns, school, friends, life. And unlike other members, we did it while shooting and reloading magazines. Eventually hunger won out and we opted to head home for dinner — even though we still had ammo in the can. We'll save that for next time.