This time the drive to the range went as hoped. No accidents and little traffic. I made it up to the indoor range to finally shoot the new P320 Compact. Since my last couple of range attempts didn’t work out, I added an extra 50 rounds to my bag for this trip. In addition to the Compact, I brought along the Full Size 320 as well.

Most of the other shooters were leaving as I arrived. A young couple was shooting at the far end of the range. I heard a lot of joyful giggles coming from her after she shot, but they appeared to be safe and attentive to what they were doing. My guess is a new shooting enthusiast was being born. 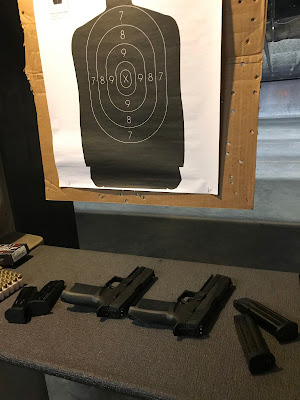 I started off with a quick 50 rounds through the new gun. For this initial run, I simply shot to see how the gun felt. It seems to me the Compact doesn’t shoot significantly different than the Full Size P320. Despite being slightly smaller and lighter, there’s little difference to be noticed. I’m very pleased with that; I can shoot either one without seeming like I’m jumping between different guns.

Next I did my usual 50 round Julie Golob drill at 10 yards. (I shoot this drill so often I think I’ll shorten its name to JG50.) I was pleased there, just a few low head shots — a failing which often plagues me when shooting this drill indoors. For the next 50 rounds I moved the target out to 15, then 20 yards and worked on trigger control. Again, no issues with keeping all the holes in the IDPA -0 zone.

My session wrapped up with another JG50 shooting the full size P320. This round I only had a couple high -1 shots from the WHO string.

It was good session and a pleasurable break from the work day. To add to the enjoyment, I spied a Bald Eagle circling the highway as I got back onto the dreaded interstate for the trip back to the office.