As we sat on the porch Saturday morning, sipping our coffee, and discussing what to do for the day's adventure, Colleen and I were in agreement; we did not want to deal with traffic or spend a lot of time on the road. I remembered reading an article in the local paper recently about a new brewery that opened just a few weeks ago, near Culpeper. Old Trade Brewery is a farm brewery located in Brandy Station, Virginia. Decision made.

After a quick lunch at Grill 309 in Culpeper, we headed over to the brewery. (If you haven't been to Grill 309, I highly recommend it.) The brewery and tasting room is located in a farm building. We were immediately impressed by the welcoming and comfortable atmosphere, with both indoor and outdoor seating. There is wood stove inside, as well as multiple fire pits outdoors, for cool weather visits. A kids activity area and an outdoor playground complete the family-friendly setting. As an added treat, there's even a free popcorn machine!

We took seats at the bar, and ordered a flight of the four beers on tap that day; Windy Pale Ale, Sarah Berliner Weisse, Tri-Corner Nut Brown Ale, and Thayer's Porter. The Pale Ale had a pleasing bitterness, with a hint of citrus. The Berliner Wiesse was refreshingly tart and fruity. The Brown Ale was quite enjoyable as well, with a crisp nutty flavor. These first three beers were listed as having a mild, ABV around 5%, perfect for an afternoon of relaxing and sipping. The "big" beer of the bunch was the Porter, which checked in at 8.7%. The boldly flavored beer would be quite enjoyable by the fire pit on a cool evening.

As we sipped our flight, brewer and co-owner with his wife, Garrett stopped by to chat. It was interesting to hear his plans for the future of Old Trade, including more beers, a cidery and events. We're definitely looking forward watching the young brewery grow, and being regular visitors.

We found all the beers to well-done and quite tasty. That made our next decisions all the more challenging. Eventually I decided on a glass of the Pale Ale, while Colleen chose the Nut Brown Ale. We took our beers outside to enjoy the view of the corn fields and the mountains to the west. 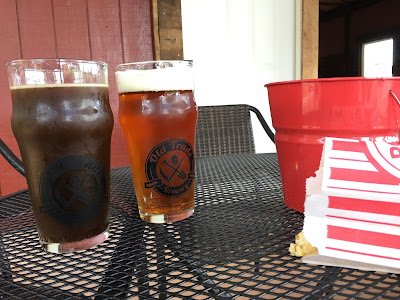 As we sipped, a few friends showed up and joined us. That led to much interesting conversation about our favorite topics — beer and local breweries. Soon my glass was empty, so I opted to enjoy the Berliner Weisse as we continued our relaxing afternoon.

When we returned home later in the day, I realized that I had been enjoying the beer, the scenery, and the conversation so much that I had neglected to take any pictures of the setting, indoors or out. I will correct that oversight on another visit. I am confident that visit will occur in the very near future.