I've been hoping to get to the outdoor range after work this week to take advantage of the unseasonably pleasant weather. Unfortunately, the range has been closed for over a week due to a broken access gate. So on Thursday, I jumped on I-95 and headed back to the indoor range. The traffic was bad, and even at a complete stop at times. The problem? The right shoulder was closed at one spot. Drive people. Drive.

I stuck it out since I had a mission for this visit. I had acquired additional magazines for the P320 Compact and wanted to test them before using them in a match, or in every day carry. I also needed to run a bunch of self defense rounds through the new gun. I wasn't worried about their performance, nonetheless I always verify all gear before it's added to my belt. In addition, I had a new pair of shooting glasses that seemed fit me well offered much more clarity than my usual ones. Nerdy as it may be, I was excited about that too. 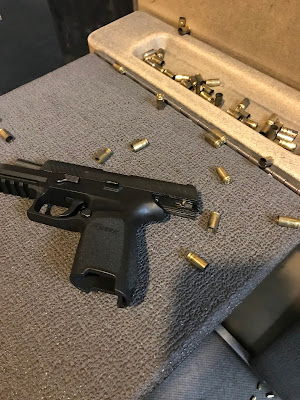 The range wasn't very crowed at all, but I was assigned a lane between two other shooters. I don't know what the guy to my left was shooting, but I could see the flash in my lane with every shot he took. The guy on the other side removed his gun case from a Gander Mountain bag, and I assume he was there trying out a new purchase. At the far end was a group of three who spent more time laughing than I was entirely comfortable with.

Given the makeup of the crowd, and the longer drive time, I did my shooting more quickly than usual. I put 150 rounds down range, and ran through all the new mags several times. Shooting quickly with the compact gun, I was able to make up the time lost in the commute and got back to my desk in reasonable time. Not the most relaxed range time I've had, but it was still worth the effort.