I escaped the office a little early one afternoon this week and decided to use that found time for a quick range visit. This time I decided I would shoot my current carry gun, using the IWB holster it rides in, instead of my competition gear. As I dropped some ammo into my range bag, I felt odd to not be loading guns into the bag. Now that my son is back at college there's also less gear and ammo to pack so it was a quick load up. 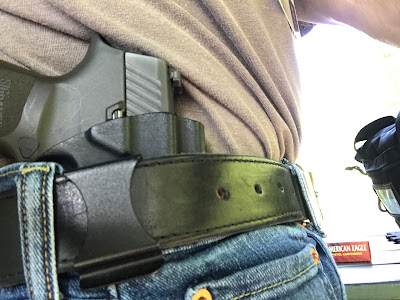 When I got to the range I realized that the change in routine led to me forgetting to grab the extra magazines for the gun. No matter, I still had two with me — the one in the gun and the spare on my belt. It meant going back to the bench more frequently to reload, but I could still shoot.

I did a few dry fire drills to warm up, drawing from the IWB holster and getting the gun on target. I then used the 150 rounds I had packed to shoot from 7, 10, 15 and 20 yards, as well as getting in some strong and weak hand only shooting.

The weather was extremely pleasant and no one else was at the park. It was a most enjoyable hour of shooting.