I hit the range with my son after work on Tuesday for a quick shooting session. It had been raining most of the day, but when it cleared up mid-afternoon I messaged my son to see if he wanted to try to hit the range after work. Not surprisingly he answered in the affirmative.

As we unpacked the gear at the range and started loading magazines we noticed that the surfaces of the guns, mags, and ammo all felt damp. The transition from the cool car to the humid air was producing a lot of condensation. Checking the local conditions on my phone I saw the humidity was up at 87%, with a dew point of 75°. The temperature hovering around 80°, so it wasn't surprising that things felt wet.

On this trip we set up at the seven yard line so I could do more strong and weak hand only shooting. I also wanted to practice sighting in on the head shots. I was extremely pleased with my initial runs at all of these tests of skill. As time went on, I noticed my performance degrading a bit significantly. The constant fogging of my shooting glasses, combined with the droplets of sweat on the lenses no doubt contributing.

I also brought along the S&W Shield, which I hadn't shot in a while. It was fun to put a few rounds through it as well. After a while we were both frustrated with the humidity, and hungry, so we decided to pick up brass and head home.

At one point in time I had a fog treatment cloth in my range bag; it seems I need to replace that important item. Despite the exceedingly humid atmosphere, it was fun way to wind down after work. 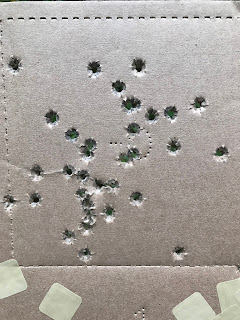