I drove over to Charlottesville on Saturday morning for the monthly Rivanna IDPA match. Instead of the regular match, this month they ran a Classifier match. There was also a side match for BUG and CCP to benefit VCDL. It was the first time I had the opportunity to shoot the new IDPA Classifier setup.


My run at the three Classifier stages got off to a discouraging start, missing a weak hand shot on the first string. On stage three, when reloading behind the barricade, I dislodged a magazine from my belt pouch. Leaving that magazine behind cost me a three second penalty. At the end I was not pleased with my score, I really should slow down on those 20 yard shots from the barricade, but still was glad to get to shoot. I didn't really need to shoot the Classifier, since the recent sanctioned matches I've shot meet the annual requirement. I wanted do it just for the practice and the chance to shoot, rather than be concerned about the score. (That's my story and I'm sticking with it.)

The side match consisted of three quick stages. Entering the BUG division, I used the S&W Shield for my runs. I've only put about 1,500 rounds through the Shield in the almost two years I've owned it, and was looking forward to the chance to shoot it in a match for just the third time.

The first stage had us stepping to the side at the draw and firing three shots through the cut out -0 zone of a close target, followed by a head shot. I made the three first shots quickly and followed with a rapid transition to the head. Too rapid — I didn't see a hole appear. Two followup shots took care of that.

The second stage consisted of just two t-shirt covered targets. The targets were attached to a steel plate behind the upper part of the target's -0 zone. Hitting the steel caused the target to fall. The empty gun and a magazine was left on a barrel in front of one target, a second barrel up range held a second magazine. At the start we loaded the gun and knocked over the first target. Backing up to the second barrel the other falling target was engaged. I didn't need to reload, but did take two shots on each target. 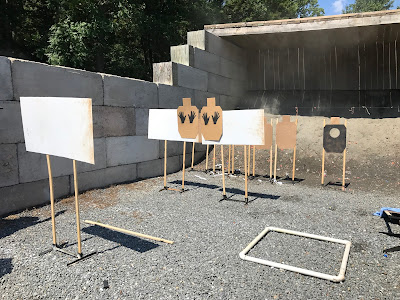 Despite the extremely warm and humid weather, it was a fun morning. I really enjoyed shooting the BUG side match, which also raised $250 for VCDL. While I don't shoot BUG all that frequently, every time I do I wonder why I don't do it more often.